On Why “Love Happy” is NOT the Marx Brothers’ Worst

Because life is never simple, Love Happy (1950) is one of no less than three “last” Marx Brothers films. Their last real one, in the sense of all three of them interacting together throughout the plot like an actual comedy team is A Night in Casablanca (1946). The last film containing performances by all three (albeit in three separate cameos) is The Story of Mankind (1957). Love Happy has all three of them, but Groucho’s turn is essentially a cameo, and Chico’s is somewhat underwritten. It was originally devised as a starring vehicle for Harpo. The other two got involved because Chico, a problem gambler,  needed the money.

The movie also has the reputation for being the “worst” Marx Brothers movie, although I don’t happen to agree. This point (badness) always confuses dilettantes and strangers to art and criticism. “But they’re you’re favorite comedy team! Why do you say they are bad?” EVERYONE, even geniuses, fail. Shakespeare wrote some plays that were bad, relatively speaking; it doesn’t mean he wasn’t the greatest dramatist in English history. Further, because of the peculiar nature of Hollywood’s collaborative assembly line, people on the acting end are uniquely dependent on others (writers, directors, producers, editors, composers, cinematographers) in order to be seen in their best possible light. You need dozens or scores of artists all working at the top of their game at the same time in order to make a good movie. It’s a miracle any get made at all, if you think about it. Hence, the majority of the Marx Brothers movies are awful. Their reputation rests on between 5 to 7 of their earliest films, depending on whom you are talking to. Love Happy is a relatively bad movie; it is weird, and it has problems, but personally I wouldn’t call it their worst picture by a long shot.  For various reasons, I would give that dubious honor to either Room Service, Go West or The Big Store. Perhaps it is a three way tie.

What redeems Love Happy for me is that it is so different from what they had ever done before. It looks different, it is shot differently, and it is a different kind of story. This makes it at least interesting and fun to watch, whereas the other three I mentioned are merely boring and irritating (actually infuriating is a better word). The others are failures at being Marx Brothers movies; this one doesn’t attempt to be the traditional kind of Marx Brothers movie, so it is more successful at realizing its aims. It looks a little fresher in my eyes, and points the way to what future Marx Brothers movies may have looked like.

The plot (co-written by Frank Tashlin)  is the usual contemptible claptrap about a troupe of actors desperate to put on a Broadway show. It is manifestly impossible to care whether they succeed or not.  Doubly so, in light of the undistinguished musical numbers we are obliged to sit through. On the other hand, the cast of the show is literally starving for food and that IS an interesting plot. Harpo, the inexplicable mute who appears to be part of the company, although I’m not sure in what capacity, goes to the basement of a grocery store to steal food for them and wanders away with several cans of sardines. Little does he know that one of the cans contains…stolen diamonds! Such plot as there is involves several wicked crooks trying to recover the jewels, which Harpo doesn’t even know they have. Which is ironic, because they could finance a Broadway show and several groceries if they could just fence these rocks, get me?

What is Chico’s role in all of this? Chico plays Harpo’s Italian friend.

And Groucho? He is a detective who narrates the story and shows up at the end. By now he was a solo movie star (Copacabana, 1947) and a game show host and had taken to wearing a real mustache and glasses rather than the fake ones that had been his previous trademarks. He is almost literally phoning it in here. One of the highlights of the picture though is his interaction with a young and then-unknown Marilyn Monroe. She does indeed cause him to wiggle his eyebrows. And if she weren’t enough there’s also Ilona Massey as a crooked countess and Vera-Ellen as a bright-eyed ingenue. 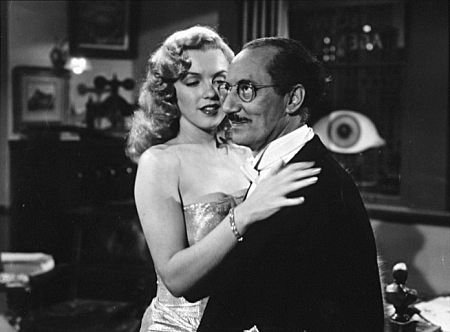 Lots of familiar character actors in the film: Melville Cooper, Eric Blore, Raymond Burr. Mary Pickford co-produced the film for United Artists. When financing ran out they struck product placement deals, giving us the unusual spectacle in the big chase scene at the climax where the Marx Brothers run across rooftops past billboards for Mobil, Bulova, Kool and General Electric. Why, it’s just like watching television!

For more on comedy film history don’t miss my book: Chain of Fools: Silent Comedy and Its Legacies from Nickelodeons to Youtube