Defending the Honor of Hal Roach Against the Ignorance of Christies 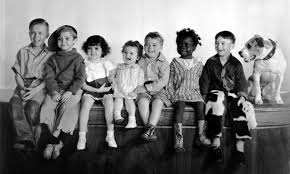 In an otherwise terrific piece by Barbara Hoffman in today’s New York Post about a new Basquiat auction and showing at Christies, I came across this humdinger in a quote by Christies’ VP Jonathan Laib about a Basquiat work called “Famous Negro Athletes”:

“The crown [depicted in the work] is said to be taken from the film company that made the Little Rascals, which is completely racist”.*

Well, “the film company that made The Little Rascals” is discovered easily enough by Googling — take ya two seconds. It’s Hal Roach Studios, of course (and later, MGM). Neither of these companies used a crown in their logo. If I had to guess I would venture that it was a reference to the logo for the Negro baseball league’s Kansas City Monarchs:

They don’t have researchers or fact checkers at either Christie’s auction house or the New York Post?

Worse than that, the statement amounts to an outrageous and incorrect slander. Mr. Laib may know a lot about art (though judging from his high appraisal of a Pepto Bismal bottle with a dollop of paint on it by Basquiat, I doubt it), but he sure doesn’t know much about the history of American popular culture.

By contemporary standards, yes, the characters of Sunshine Sammy, Farina, Buckwheat and Stymie play like stereotypes — but in the 1920s, 30s and 40s, the Our Gang/ Little Rascals series was at the very vanguard of progressive race relations in mainstream American culture. An entirely INTEGRATED gang of friends who play together, help each other, share candy, have each others backs? This, in the age of the Ku Klux Klan??? Of “Strange Fruit” and lynchings?  And Sunshine Sammy, by the way, was the first African American ever signed to a long term movie contract. This was Hal Roach’s vision — WAY ahead of the curve of the rest of the country at the time….this includes the other movie studios, vaudeville (which was segregated), professional sports, any other realm you care to name.  So it is REALLY unfair to dismiss him and this movie series as “completely racist”. “Racist,” yes — except for the entire REST of the country which was way MORE racist. You stand corrected, Mr. Laib.

(And I love Basquiat, by the way. I am just not too impressed by that Pepto Bismal bottle).

*The remark is among the picture descriptions; scroll up to it with the arrows.

For more on Our Gang, please check out my 100th anniversary podcast episode here.