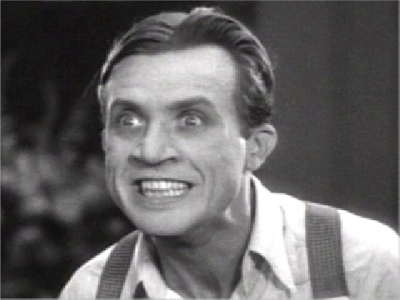 Originally a musician, Frye gravitated toward theatre, appearing in 17 plays on Broadway from 1921 through 1934, including the first American production of Pirandello’s Six Characters in Search of an Author (1922) and Devil in the Cheese (1926-27), the latter notable for being his first project with Bela Lugosi. The first of Frye’s memorable screen roles was as the giggling, bug-eyed, insect-eating Renfield in Dracula (1931). This terrific performance doomed him to being typecast as similarly insane, monstrous or idiotic characters in horror films thereafter, including the equally memorable Fritz (often misidentified as Igor) in Frankenstein (1931) and other horror roles in The Vampire Bat (1933), The Invisible Man (1933), The Bride of Frankenstein (1935), The Crime of Dr. Crespi (1935), Dead Men Walk (1943) and Frankenstein Meets the Wolfman (1943). He also appeared in some of the intermediate Frankenstein movies, either as a supernumary or in performances that wound up on the cutting room floor. Only occasionally was he able to try other modes, as in the original version of The Maltese Falcon (1931), in which he played the part later identified with Elisha Cook, Wilmer. Most of Frye’s other film work was in B movies and serials; he also continued to work in theatre. He had been cast in the 1943 bio-pic Wilson , when felled by a fatal heart attack.

To learn more about show biz history, consult No Applause, Just Throw Money: The Book That Made Vaudeville Famous, available at Amazon, Barnes and Noble, and wherever nutty books are sold.