Today is the birthday of the dwarf actor Angelo Rossitto (1908-1991). The 2′ 11″ Rossitto has the interesting distinction of being the only member of the sideshow cast of Tod Browning’s Freaks to have had a real film career, appearing in over 70 films in a 60 year stretch between 1927 and 1987.

Rossitto’s career was a lot like the better known Billy Barty’s in that it ranged from real substantial roles…to jobs as an extra…to brief appearances in sight gags…to parts where was buried in a costume and you couldn’t see him at all. He played performing little people in circus movies, monstrous sidekicks in horror flicks, space aliens, elves, and of course set dressing in scenes of Roman or Weimar decadence. Interestingly, unlike most performers of his type I find no indication that he was ever a performer in sideshows, circuses or live theatre. Billed under his own name, or sometimes as “Little Moe”, “Little Angie” or “Angelino” the Omaha-born Rossitto took movie roles on the side to supplement the income he made from his Los Angeles news stand.

His first movie was The Beloved Rogue (1927) with John Barrymore and Conrad Veidt. Other roles that afforded decent amounts of screen time (and face time) included the aformentioned Freaks; the 1941 comedy Spooks Run Wild with the East Side Kids and Bela Lugosi, and two more straight-up horror team-ups with Lugosi, The Corpse Vanishes (1942) and Scared to Death (1947); 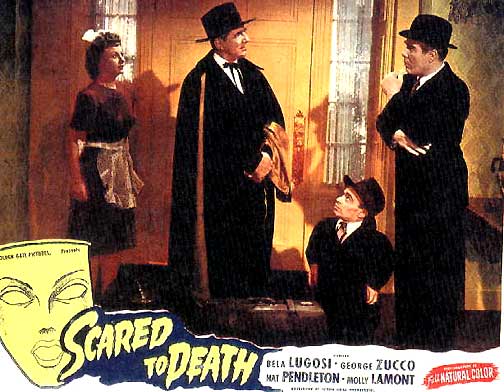 another horror part in Dracula vs. Frankenstein (1971); a semi-regular role as Little Moe on the tv series Baretta (1977), and the mad scientist “Master” (who rode on the back of “Blaster”) in the dystopian Mad Max: Beyond Thunderdome (1987).

But he’s often present in subtler ways. In Laurel and Hardy’s Babes in Toyland (1934) he plays one of the Little Pigs.