Robert Wagner in “It Takes a Thief”

Today is the birthday of actor Robert Wagner (b. 1930). Don’t give me no crap about Hart to Hart — that was only the third of Wagner’s successful tv series. The second, Switch (1975-1978), on which he co-starred with Eddie Albert, may well get its own post here some day. But today I want to talk about the show I knew first and know best, and indelibly associate Wagner with: It Takes a Thief (1968-1970 — Don’t get any funny ideas about my age, I only watched it in re-runs). 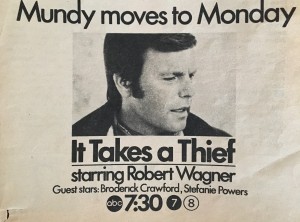 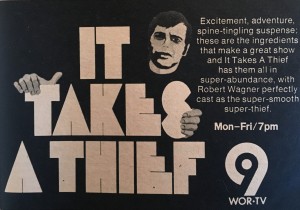 In It Takes a Thief, Wagner plays a swinging playboy who formerly financed his rich lifestyle from his income as a cat burglar. If that part sounds familiar, it’s because it’s a sort of twist on Hitchcock’s To Catch a Thief. Both titles are taken from the old adage “It takes a thief to catch a thief”.  The premise of the tv show explored that adage fully. Sprung from jail by the federal government, Wagner’s character is now made to work for Uncle Sam as a spy.  Apparently he’s the only guy in the world who knows how to crack a safe! And that may well have been true — look at the botch-job J. Gordon Liddy and his band of nitwits did when called upon for very similar duties for their President a couple of years later.

None of Giddy’s mooks looked as good as Wagner though, who spent half his time tiptoeing through mansions in the dead of night….and half the time romancing the ladies.  Those are the two images I associate with the show: Wagner in a black turtleneck and slacks, in a pair of tight gloves, walking around somebody’s house in the dark with a flashlight and a microfilm camera…and Wagner on a sofa puttin’ the moves on the chick of the week.

Also there were great supporting stars. The distinctively voiced Malachi Throne played his boss. And in the last season, none other than Fred Astaire had a semi-regular role as Wagner’s father – -also a cat burglar.

And don’t my new book Chain of Fools: Silent Comedy and Its Legacies from Nickelodeons to Youtube, just released by Bear Manor Media, also available from amazon.com etc etc etc