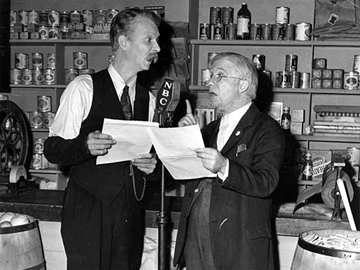 Today is the birthday of Chester Lauck (1902-198), best known for playing Columbus “Lum” Edwards of the radio comedy team of Lum and Abner. He’d met his partner Norris Goff (1906-1978) when the two were growing up in Mena, Arkansas. Later the two met up again as students at the University of Arkansas and worked up a blackface** act. This quickly evolved into hillybilly routines based on life in the area around where they’d grown up, with the young men playing the much older Lum and Abner, co-owners of the Jot ‘Em Down general store. The popularity of their performances led to local radio in 1931. The show struck a chord and went national almost immediately. They remained on the air through 1954, and made a half dozen movies besides.

The team’s gentle rural humor was a definitely a precursor to tv shows like The Andy Griffith Show and Gomer Pyle, USMC, both of which Goff made frequent guest appearances on after Lauck had retired. The people of Waters, AK were so proud of the show, they changed their name to the fictional name from the show : Pine Ridge. And if you go there, you can visit the Lum and Abner Museum! http://lum-abner.com/

In honor of the season, here’s their 1945 Valentine’s Day episode:

For more on show biz history, consult No Applause, Just Throw Money: The Book That Made Vaudeville Famous, available at Amazon, Barnes and Noble, and wherever nutty books are sold. And don’t miss my new book Chain of Fools: Silent Comedy and Its Legacies from Nickelodeons to Youtube, just released by Bear Manor Media, also available from amazon.com etc etc etc