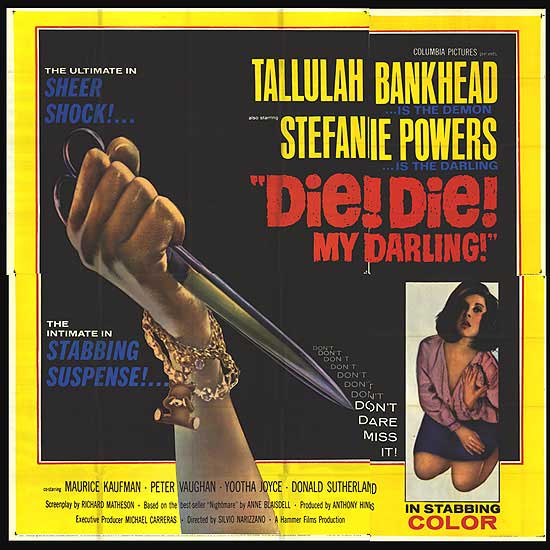 This one came as something of a revelation. It’s an early entry into the “psycho-biddy” genre, characterized by films like Whatever Happened to Baby Jane, Strait-Jacket and Hush…Hush, Sweet Charlotte. Co-produced by Hammer Films and Columbia Pictures, this 1965 film was called Fanatic for its U.K. release and Die, Die, My Darling in the U.S., presumably due to the fear that it might cause distress on the part of psychotic wackos who identify too strongly with Tallulah Bankhead’s character and thus become offended.

Bankhead plays a religious nut who occupies a decaying mansion way out in the English countryside, assisted by her servants, one of whom is a hilarious half-wit played a hair too convincingly by Donald Sutherland in one of his first roles.

As with all of the aging grand dames who took on such roles in this subgenre (Joan Crawford, Bette Davis, etc), the usually glamorous if not precisely beautiful Bankhead is dressed all the way down for this part. Her appearance is shocking the moment she appears in the screen.

The plot? You can’t tell from that poster? Kittenish Stefanie Powers pays a courtesy visit to the mother (Bankead) of her deceased boyfriend, and doesn’t learn that the woman is insane until it is far too late. Bankhead’s got on the hairshirt…doesn’t even put salt on her wheat germ , and she goes from making Powers wipe the lipstick off her face to locking her in an attic room and starving and beating her to prepare her for her reunion with her beloved son in heaven.

The poster is misleading in one respect; there isn’t a lot of Psycho style stabbing in this picture. Bankhead’s character resorts to a handgun to do most of her bullying, which in this particular subgenre is ironically a little refreshing. The film later inspired a song by the punk group The Misfits.

For many more insights into the film, check out Jim McLennan’s review on Filmblitz.