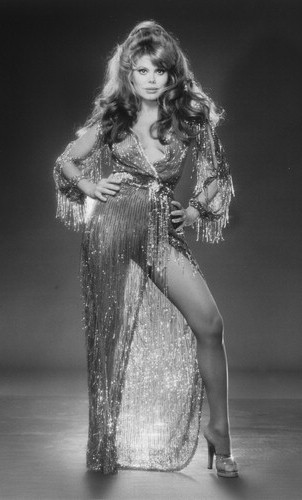 Today is the birthday (according to one source) of that peculiar late 20th century phenomenon known as Charo (Maria del Rosario Mercedes Pilar Martinez Molina Baeza — I can hear her saying that even as I type it). IMDB says she was born January 15, 1945, although there are doubts. And, truthfully, does Charo seem like the kind of lady who would lie about her age? I put it to you.

When you were my age in the mid 1970s, Charo was merely one of a hundred mysterious question marks bouncing around the television landscape with no explanation or context. Who was she, we wondered? She showed up on all the talk shows and variety programs, and even comedy/dramas like The Love Boat (eight times!), and her routine was that she spoke broken English, and said “Cuchi-Cuchi!”. But nobody knew who she was or how she got there. I mean, can anyone just show up and be on television?

The explanation is a lesson in the pitfalls of American show business. Charo was (is!) one of the best flamenco guitar players in the world. She studied under Andres Segovia in her native Spain since childhood, and performed with her husband Xavier Cugat’s band in her early twenties (she married Cugat in 1966; divorced him in 1977). Now, I guess we knew she could sing, dance and play the guitar back then, because she would occasionally do so on her television appearances. But it was CLEAR that she was primarily booked as a comedy burlesque routine (and a funny one). Classical guitar??? She got booked because she shook her money-maker, did a sort of Spanish minstrel routine and said “Cuchi-Cuchi!” . I’m not saying I don’t think it’s funny. I’m actually smirking even as I type this. But the whole thing got out of hand. Her talents deserved respect and they got pushed to the absolute bottom. If you took a poll: “Does Charo have any talent?” I swear an almost universal percentage would say “no”. If you’re talking about acting talent, maybe so. But musical talent? It’s just not fair.

To find out more about  the variety arts (including television variety), consult No Applause, Just Throw Money: The Book That Made Vaudeville Famous, available at Amazon, Barnes and Noble, and wherever nutty books are sold.