Al Mardo and His Do-Nothing Dog 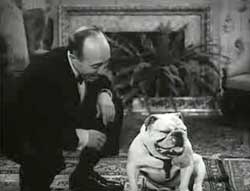 Al Mardo (Amato Brosco, 1894-1984) got his show business start around 1910 dancing on the street for coins and amateur boxing in Providence, Rhode Island. He began to compete in contests there and in nearby towns, then ran off with a travelling burlesque show at the age of 16. After 30 weeks of work, he struggled in New York for a weeks before landing his next secure job with a Gus Edwards revue called “School Boys and Girls”, where he performed with Lila Lee (then called “Cuddles”.)

In 1921 he emerged with a new act that was to become legendary in show business. He came out with a homely bulldog named Flash and cheerfully announced various tricks, which the bored-looking dog when then proceed NOT to do, and then Mardo would gloss over the dog’s inertia with cheerful patter. Audiences loved this act it so much was to be Mardo’s bread and butter for the next several decades, through Ken Murray’s Blackouts in the 1940s, and television starting in the 1950s. He recreated his act in the 1944 film That’s My Baby.

Mardo was still doing performing live and on television as late as the 1970s and did a lengthy interview for the LA Times in 1983, just a few months before he died.

To find out more about vaudeville including great nut acts like Al Mardo and His Do-Nothing Dog, consult No Applause, Just Throw Money: The Book That Made Vaudeville Famous, available at Amazon, Barnes and Noble, and wherever nutty books are sold.