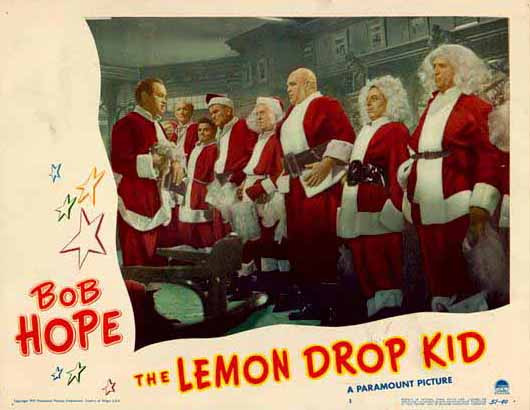 If — and I use the word knowing there’s no “if” about it — I repeat, “if” you happen to find yourself in the grip of “Christmas Special” ennui this holiday season, as a result of having seen the same holiday programs dozens of times year after year after year (however much you loved them initially)…I say IF you find yourself in that condition, I may have an antidote. A charming movie with a Christmas angle made in 1951, and one you may not have seen, and if you’ve seen it, you probably haven’t seen it to death.

The Lemon Drop Kid is a great mash-up of stuff. It’s a Damon Runyon story, not unlike Guys and Dolls. It stars Bob Hope, who must stretch in at least two directions: one, to speak the Runyon patois and seem a streetwise heel, and two, to be heartwarming, for in this department Bob Hope is generally no Bing Crosby. And he pulls it off for the most part. Hope plays a gambler and tout who accidentally causes a gangster (Fred Clark) to lose $10,000. In order to pay it back, he starts an old folks home so he can raise donations. Naturally, along the way he starts to feel bad about the scam, and begins to actually want to help the old folks even as he makes it up to Moose Moran.

Other notables in the film include Jay C. Flippen, William Frawley, and none other than Tor Johnson. Yes! Tor Johnson! If you don’t believe me, look at the picture above! The film was co-directed by Frank Tashlin. An earlier version in 1934 featuring everybody’s favorite, Lee Tracy in the Hope role.

Because it takes place at Christmas it’s at least sort of “honorable mention” holiday film, and does promote generosity. The film is also the cinematic source of the popular holiday song “Silver Bells”, memorably sung by Hope and Marilyn Maxwell, although Bing had had the hit with it the year before. Here it is!