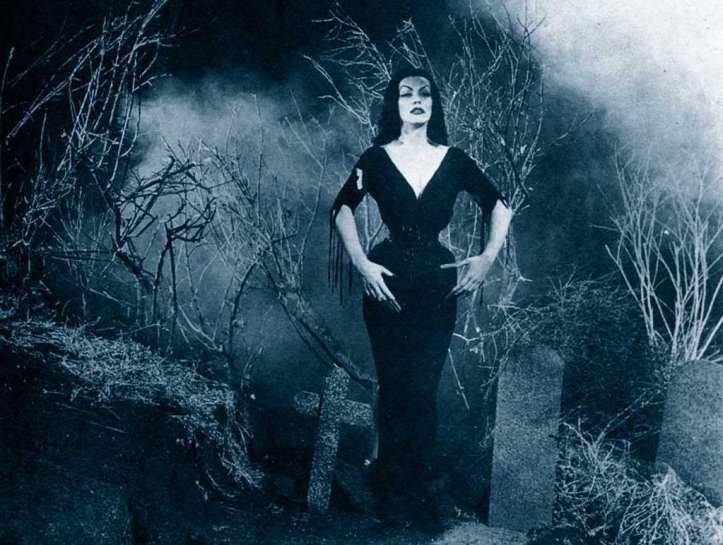 Today is the birthday of the very first television horror host Vampira (Maila Nurmi, 1922-2008). Nurmi had been a pin-up model, chorus line dancer and bit player on stage and screen when she was discovered by local Los Angeles tv producers at a costume party in 1953, bedecked in an outfit inspired by the cartoons of Charles Addams. (The character of Vampira thus predates the tv sitcom characters Morticia Addams and Lily Munster by over a decade). Starting on KABC in 1954, Vampira would introduce horror movies (I was about to use the adjective “old” but back then they weren’t so old) with a campy detachment, delivering puns in a deadpan manner that seemed to mix elements of ghoulishness with the then-sprouting beatnik culture. She was simultaneously sexy, funny and scary, and my friends WHAT I ask you is more powerful than the combination of those three qualities? They add up to a cocktail that will knock you out!

Her reign was quite brief. She was at KABC for one year, and then at KHJ the next year, which takes us through 1956. She was able to parlay the popularity of her character into a little national attention. She got guest shots on The Red Skelton Show and Playhouse 90, and was memorably cast in the Ed Wood film Plan 9 From Outer Space, which is how most of us who are younger and not from the L.A. area know her.

Murni was also in a handful of other films including The Beat Generation (1959) and the surprisingly good Sex Kittens Go to College (1960). By the early 60s her day in the sun was very much over.

But she cast a long shadow. By then, the entire country was full of her imitators, campy horror hosts at local television stations, a tradition that continues to this day. Some of the better known ones have included Zacherly, Svengoolie, Commander USA and the best known of them all Elvira, Mistress of the Dark. The latter emerged on KHJ-TV in 1981 before going on to become a national personality. The story goes that Murni was involved in the genesis of the character, but mistakenly thought she had signed on to a revival of Vampira. When she learned that the character was to be played by Cassandra Peterson rather than herself, she walked. Elvira has her detractors, but this correspondent is not one of them. While she has her similarities to Vampira, the differences are marked, and she has plenty of positive attributes, some of which can be physically measured. But that’s a different post. For today, we exhume Vampira.