The Melodious Monotone of Ned Sparks 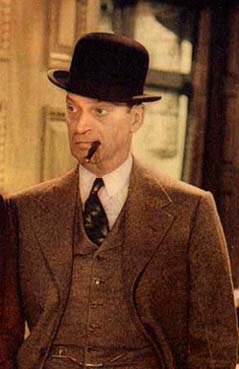 Ned Sparks is on my very short list of favorite character actors — in fact, I have gone so far as to channel him in certain past performances, and I plan to do so again!  Sparks is that guy with the monotonic, perpetually glum manner of speaking in 30s musicals like 42nd Street and Gold Diggers of 1933. The character was so unmistakable that he was frequently caricatured throughout the 30s in cartoons by Disney and Warner Bros. And I swear his voice is the model for the Hanna-Barbera hyena character Hardy Har Har several decades later.

Sparks was born Edward Sparkman in Ontario on this day in 1883. As a teenager he set out for the Klondike to prospect for gold, but ended up bumming around mostly, briefly enrolling in a seminary, and performing in mining camps and medicine shows. Gradually, he began to graduate to small time vaudeville (nicknamed the “Death Trail” in the Pacific Northwest, where dates were low-paying and few and far between). In 1907, he moved to New York, playing in vaudeville comedy sketches until he broke into Broadway in 1912 with the show Little Miss Brown. His 8 year Broadway career culminated with the revue Jim Jam Jems (1920) starring Frank Fay, Harry Langdon and Joe E. Brown. After another revue, which flopped, Sparks concentrated on films. He made several silent pictures, but sound was his metier, and he really hit his stride in the days of radio and early talkies. By the forties his career wound down. He uttered his last complaint in 1957.

To find out more about the history of vaudeville and great vaudeville veterans like Ned Sparks, consult No Applause, Just Throw Money: The Book That Made Vaudeville Famous, available at Amazon, Barnes and Noble, and wherever nutty books are sold.