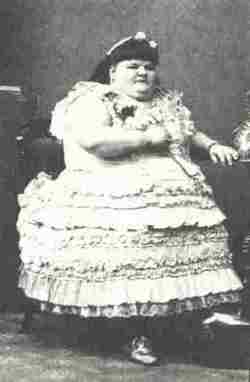 A cautionary tale with a sad ending. Blanche Gray was born in Detroit in November 1866. At the time of her birth she weighed 25 lbs, proportions that killed her mother a couple of days after her delivery. By the time she was 12 years old, at the relatively normal height of 4 feet 8 inches tall, she weighed 250 lbs.

By October 1883, Blanche now weighed 517 lbs, and things were looking up for her. She’d gotten married to a young man named David Moses and had become a professional entertainer. She was living in New York, had performed at Coney Island, was just ending a three week run at the Bowery Museum. She was just about to embark on a national tour, with Philadelphia as her next stop. But it all ended abruptly when her rapid weight gain (67 pounds in one month) killed her. She died in her sleep on October 26, 1883, a little bit shy of her 17th birthday.

To learn out more about show business history consult No Applause, Just Throw Money: The Book That Made Vaudeville Famous, available at Amazon, Barnes and Noble, and wherever nutty books are sold.