Abbott and Costello on Radio 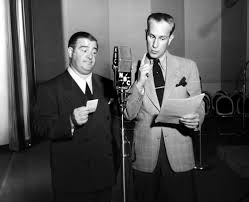 Simultaneous to the launch of their film career in the early forties Abbott and Costello became weekly radio fixtures, first on the Chase and Sanbourne Hour, then with their own weekly program, which lasted from 1942 until they switched to television in 1951.

In some ways, radio is their ideal medium. Those old burlesque routines are largely verbal, and furthermore, radio’s ethereal format makes it easy to switch from “sit-com” to straight-up variety elements like musical guests  and so forth. (Their first year on television was variety – –The Colgate Comedy Hour, but after that they did a straight sit com). The radio show also had knock-out regulars like Frank Nelson, Mel Blanc and of course Sidney Fields.

The web site My Old Radio has scores and scores of episodes here:

In honor of the Halloween season, we leave you with their Haunted House episode (one of many), which aired in 1947:

To learn about the history of vaudeville and burlesque, consult No Applause, Just Throw Money: The Book That Made Vaudeville Famous, available at Amazon, Barnes and Noble, and wherever nutty books are sold.