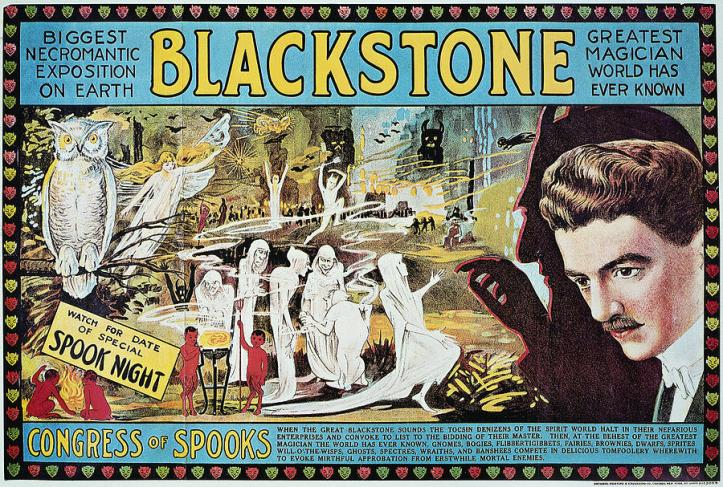 Aside from being a great magician, Blackstone is noteworthy for bridging the gap between the classical age of magic at the beginning of this century, and the television era, when he was a familiar sight on television variety shows.

His real name was Henri Bouton. He got into magic because he worked for the cabinet-maker who put together Harry Kellar’s trick boxes. He seems largely to have been a sort of magic act Borg, swallowing up the acts of whomever he encountered, absorbing them and incorporating them into his own act. After learning what he could from Kellar’s cabinets, he bought up the illusions of one Albini the Great, who had just passed way. Originally calling his act “Harry Bouton and Company, Straight and Crooked Magic”,  he got a deal on an enormous quantity of playbills for a retired magician named Frederick. So Bouton was “Frederick the Great” until 1917, when America’s entry into World War I made being named after a German emporer seem not too swift.  He then became Blackstone. By now he was headlining in vaudeville. A particularly vaudevillian touch to the act was the presence of his wife Inez Morse “The Little Banjo Fiend”, who managed to squeeze a musical turn between all the legderdemain.

In the 20s the act got topical. In one of countless variations on “Metamorphosis”, Blackstone did a bit where he was seized by Ku Klux Klansmen, tied in a sack and hoisted into the air by a rope. A Klansman rides a horse onstage and removes his hood. Behold! It’s Blackstone! How’s that for politically charged showmanship?

“Oriental Nights” was a pageant featuring dancing girls and a camel, culminating in “the Phantom Stallion” a big black horse that disappeared. Despite the scale of all these illusions, his most famous trick comes under the heading of ”intimate magic”. It was called “the Spirit Dancing Handkerchief”. In it, he would borrow a handkerchief from someone in the audience, knot a corner, so that it  looked like a little ghost, then mysteriously make it dance all over the place on its own.

During World War II, he did a USO tour of 165 bases, had his own radio series and 2 separate Blackstone comic books. Starting in the 50s he did TV shows like Ed Sullivan, the Tonight Show, Person to Person, and the Jackie Gleason Show. He died 1965, long enough to have been on the same bill with Herman’s Hermits — and to have inspired countless magicians who still walk among us. 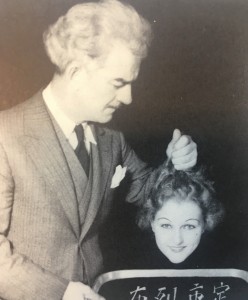 Here he is in his later years, sawing a woman in half:

To find out more about show business past and present, including magicians like Blackstone, consult No Applause, Just Throw Money: The Book That Made Vaudeville Famous, available at Amazon, Barnes and Noble, and wherever nutty books are sold.