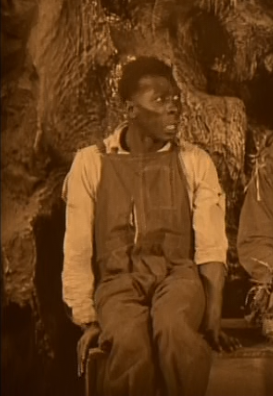 Today is the birthday of pathbreaking black comedian Spencer Bell (1887-1935). Originally from Lexington, Kentucky, Bell started out in minstrel shows and vaudeville before breaking into pictures in 1919, mostly supporting Larry Semon and Lige Conley, but also to be found in movies starring Billy Bevan, Poodles Hanneford, Bobby Vernon, Al St. John, Jimmie Adams, Neal Burns and others. His best known picture nowadays is Semon’s notorious 1925 version of The Wizard of Oz.

Bell’s (real) name deserves to be better known, being as he was one of the first African Americans to make his way in the film industry — a decade before the likes of Stepin Fetchit came to the fore, for example. His parts were almost invariably egregious stereotypes and one-off sight gags. His billing in many films was “G. Howe Black”, his parts were usually servants or menials or some sort (named Snowball or the like), and the gags often revolved around his superstitious fear, or the fact that he’d fallen into a white substance (flour, talcum powder) making him resemble a Caucasian (at least in the film’s twisted world). But this didn’t stop him from being pretty darned funny, which is undoubtedly why he was hired and frequently employed in the first place. (His running-in-place-while-terrified routine is a showstopper). In the last years of silents and in the early years of talkies he worked most frequently in bit parts for Mack Sennett. He died during a stomach operation at age 47

Here is one of the Semon comedies in which Bell appears as G. Howe Black. In Horseshoes (1923), Bell is punched in the face by boxer Oliver Hardy — and gets a WHITE eye!

To find out more about vaudeville past and present, consult No Applause, Just Throw Money: The Book That Made Vaudeville Famous, available at Amazon, Barnes and Noble, and wherever nutty books are sold.