The Sad Death of Jumbo 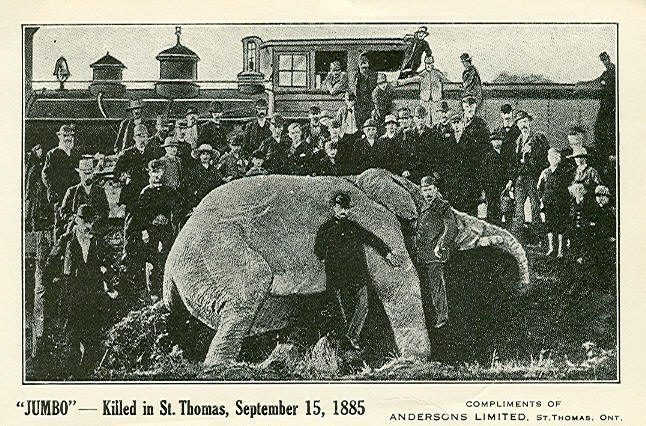 On September 15, 1885, the most famous elephant star of them all, Jumbo met his untimely end on the railroad tracks.

Born in the Sudan in 1861, Jumbo had previously been exhibited in Paris and London zoos until purchased by P.T. Barnum in 1881 — to a huge protest and outcry from the British public. By the way, the word “Jumbo” which we commonly use today to mean large, comes from the elephant, not the other way around. He’d been named by his zookeeper, the name an apparent corruption of either “jambo” (Swahili for “Hello”) or “jumbe” (Swahili for ‘chief”).

Jumbo became the star of of Barnum’s circus overnight, quickly capturing the public’s imagination. Whether or not Jumbo was the biggest elephant in the world (estimates and claims for his height ranged from a little under eleven feet to a little over 13) didn’t matter — the public believed he was, and that was good enough for Barnum, who no doubt was the one who convinced them of that through clever advertising: 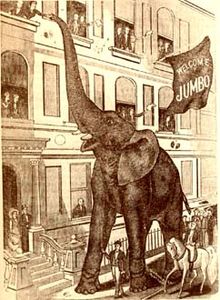 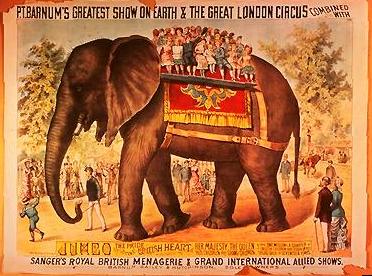 So that the kiddies just had to take home one of these: 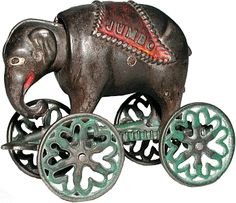 Sadly, after having been a star for four years, Jumbo was struck and killed by a freight train in St. Thomas, Ontario as the circus train was off-loading. Barnum claimed he died trying to save the life of dwarf elephant Tom Thumb as depicted in this illustration. And, well, why not? 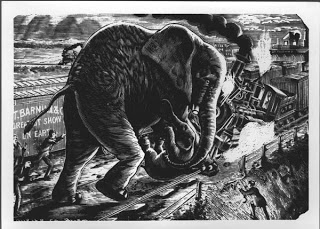 The event is commemorated in St. Thomas to this day with this life-sized statue: 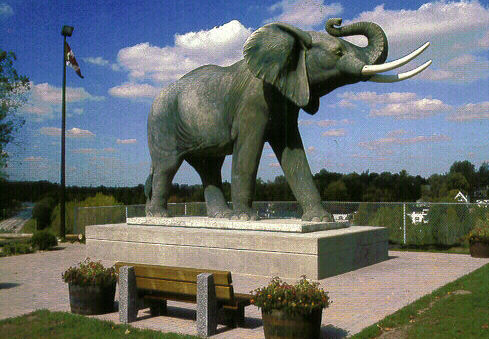 As for Barnum, true to form, he made lemons into lemonade by exhibiting Jumbo’s skeleton for awhile:

He subsequently donated the bones to the American Museum of Natural History, where they live today, although for many years they have been in storage, out of sight of the public:

Neither did Jumbo’s hide go to waste. Taxidermically stuffed and mounted, the hide was donated to Tufts University and was placed in Barnum Hall where it was a sort of beloved mascot for many years: 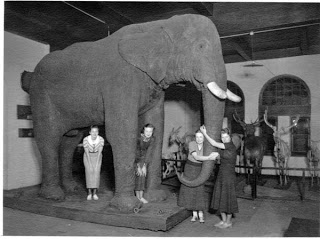 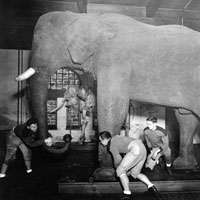 Unfortunately the hide burned in a fire in 1975 — and thus did Jumbo die his second death. But his fame lives on!