Buddy Holly: Center of the Universe 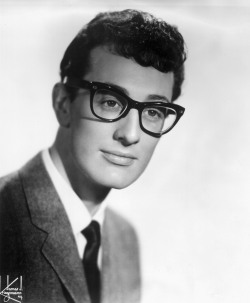 Today is the birthday of Charles Hardin “Buddy” Holley (spelled professionally as “Holly”, 1936-1959). It’s easy to obsess about the topic; he was so prolific and so innovative in such a short time span, his influence was so great, and he had so many ambitions and so many plans when his life was cut short at age 23 (how is that possible?) that you keep finding yourself wanting more of him through whatever means possible. Buddy Holly fans are kind of like Beatles fans, who having exhausted the finite number of sanctioned recordings, forever pursue whatever scraps they can…demos, home recordings, tapes of live radio appearances. The loss of this young artist was just tremendous.

So powerful was his legacy that ripples and echoes reached me long before I found my way back to the source. Linda Ronstadt had hits with “That’ll Be the Day” and “It’s So Easy” in the mid 70s. Gary Busey portrayed him in the 1978 bio-pic.  Elvis Costello’s entire image was an homage to Holly. As a teenager I began to explore The Beatles and the Rolling Stones, both of which covered Holly’s tunes. The Beatles in particular owed their early sound in large part to Holly’s, and indeed named themselves in emulation of his group The Crickets.

When I was around 19 and 20, when I was learning to write songs and play guitar, I finally spent a lot of time with Holly’s recordings directly. I taught myself to play and sing several of his songs; my favorites to do were “Well…Alright”, “Words of Love”, “Peggy Sue” and “Maybe Baby”. One might think of this as the least characteristic phase of my artistic development (the thought of the uncool, self-conscious me trying to deliver these earnest songs is, was and ever shall be fairly mortifying to me) but I learned tons about songwriting from the experience. And what I learned was extremely useful during my next phase when I began to explore artists a little closer to me in sensibility, e.g. Jonathan Richman.

Holly really is at the center of the universe of the now-long-dead historical curiosity called rock and roll. First, arriving late in the game of rock and roll’s early era, he was a synthesis of all that had come before, mixing hiccuppy rockabilly type vocals from Memphis types like Elvis and Carl Perkins, with black influences like Chuck Berry and Bo Diddly, both of whose songs he covered, the latter of whose style he emulated in his own songwriting, notably “Not Fade Away”.

But secondly, he invented new things…the Beatles would have been impossible without him. People always erroneously reduce the blues and rock and roll to twelve bars and three chords. For the innovators, it was never that. Just about all of Holly’s original tunes have some exotic element, a weird melodic turn, an extra odd chord of some sort to make it interesting. You’re trying to have a hit record, for god’s sake! You want it to sound DIFFERENT, not the same as everything else! I often think of the strange, skipping drum pattern on “Peggy Sue” — not to mention the surprising chord change on the bridge. Almost every tune he recorded had some element like that set it apart. And in the end, he was experimenting with orchestral string sections. The mind boggles at how different the world would be if he’d gotten to realize some of his aspirations.

Apart from songwriting he also had an influence on performance, it seems to me. I think of all those weepy teeny-bopper stars of the early 60s (Fabian, etc) as taking a page out of his book. Elvis of course also had a sensitive side, but you also had the impression that if adequately perturbed he could throw his monkey wrench down and brawl with you outside the gas station. Buddy Holly is always “Crying, Waiting, Hoping”. It’s always “Raining in [His] Heart.” Maudlin? That’s show biz!

Here he is in one of his first television appearances on Arthur Murray’s Dance Party in 1957:

To learn more about the history of show business (including television variety), consult No Applause, Just Throw Money: The Book That Made Vaudeville Famous, available at Amazon, Barnes and Noble, and wherever nutty books are sold.