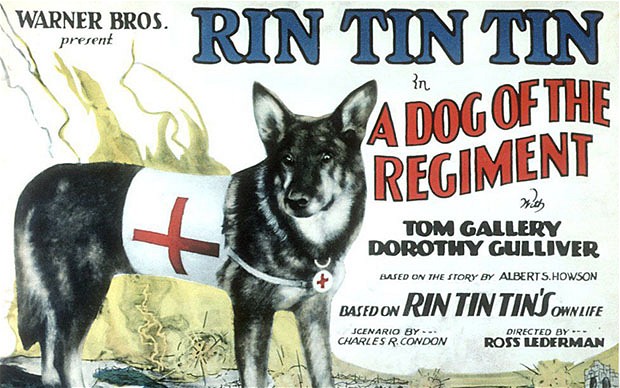 When I was a kid watching the re-runs of the then 20 year old tv show The Adventures of Rin Tin Tin, I little dreamt that the talented German Shepard who was its star was actually (or was supposed to be) Rin Tin Tin the FOURTH.

The original Rin Tin Tin was found as a newborn pup by an American doughboy named Lee Duncan on a World War I battlefield the first week of September, 1918 (roughly a century ago). “Rinty” as Duncan nicknamed him, proved uncommonly intelligent and talented, and began to get cast in movies starting in 1922, with Duncan as his trainer. The dog’s first starring feature Where the North Begins (1923) has often been credited with making a success out of the newly formed Warner Brothers studio. The original Rin Tin Tin was to star in over two dozen more films.

In 1930, Rinty was brought on a promotional tour of big time vaudeville houses, including a headlining slot at the Palace. By that point he was also a radio star. The original pooch passed away in 1932, but he was followed in films by Rin Tin Tin II and Rin Tin Tin III through 1947.

The Adventures of Rin Tin Tin ran on ABC from 1954 through 1959. The actual Rin Tin Tin proved a wash-out, however, and several more talented dogs were surreptitiously hired to play the role of the heroic Shepherd. Trainer Lee Duncan passed away in 1960.