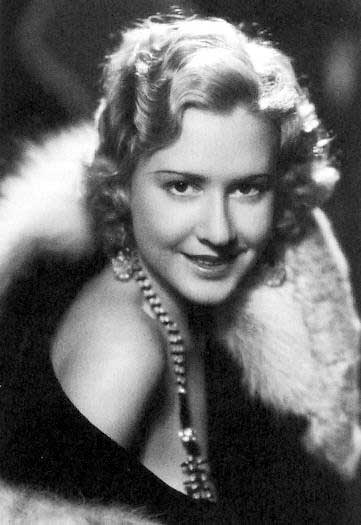 Mae Clarke (born Violet Mark Klotz on this day in 1910 in Philadelphia) took dancing lessons as a kid. Discovered by a producer while dancing in Atlantic City’s Steeplechase Pier, she was brought to New York where she worked in vaudeville and nightclubs. (She must have made an impression — Anita Loos wrote that she based the character of Lorelei Lee on Clarke). She married Fanny Brice’s brother Lew in 1928. Fanny got Billy Rose to write an act for the couple, which they performed in vaud, resulting in the discovery of Mae by Hollywood talent scouts in 1929. Her smash year was 1931, during which she played Colin Clive’s bride-to-be in Frankenstein, had a grapefruit smashed in her face by James Cagney in The Public Enemy, and starred in the original versions of The Front Page and Waterloo Bridge. There’s another classic scene of Cagney’s onscreen brutality to Mae in 1933’s The Lady Killer — less notable for Mae’s performance than for the shocking content of the scene, which has made it notorious.

That year, Clarke’s face was damaged in a car accident caused by actor Phillips Holmes, who had been driving while drunk. Her leading lady status started to ebb away after that. The parts got increasingly smaller and the films increasingly inconsequential after that. She continued to act until 1970’s Watermelon Man, and passed away in 1992. For even more dope and depth on Mae, see the Countess’s post here.

To find out more about  the history of vaudeville, including vaudeville veterans like Mae Clarke, consult No Applause, Just Throw Money: The Book That Made Vaudeville Famous, available at Amazon, Barnes and Noble, and wherever nutty books are sold.