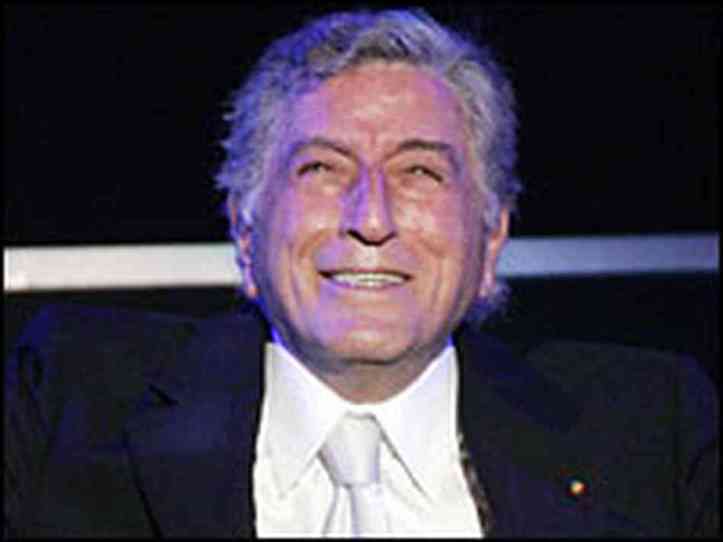 An office in the vicinity of Carnegie Hall, circa 1989.

HUSKY VOICED MAN (detached, other-worldly, like that of the character John Malkovich played in the movie Under Fire) Uh….yeah. Hi. I just received this…basket of fruit…

ME: Oh, hi, Tony! Isn’t that something? It’s a gift from [British impresario] to thank you for your [posh London venue] concert.

TONY: Yeah, I don’t know about that. Listen: what’s the idea of having a BANANA in that basket? H’m? You think that’s funny?

ME: Uh…(treading carefully) I’m sorry you would think that, Tony, but it’s really not. It’s a gift from [that London impresario].

TONY: Then how come there’s a BANANA in it?

ME: A lot of fruit baskets have bananas in them. Don’t most…?

TONY: Yah. You’re talking in circles now, kid. All I know is you people down there are having a grand old laugh about this and if it keeps up you can hit the road, Jack!

When I’d taken the job as an assistant in Tony Bennett’s management office, my boss the office manager had told me what to expect but I listened with one ear, I didn’t completely believe her. I mean, “Don’t deliver any bananas”. Sure, I won’t deliver any bunches of bananas up to Tony Bennett’s place. That’s pretty easy, right? I mean, he’s not Magilla Gorilla. But a fruit basket arrives — surely you don’t mean that I should gingerly lift off the colored cellophane and remove any bananas that might be in there before delivering it, lest this internationally famous celebrity think his relatively powerless factotums are FUCKING with him?  But that was precisely what she meant.

“I know why you do this,” he hissed to me one time, “You do this to mess with me. You wanna make me out to be some bad cat, but I’m not gonna lie down for it. It’s fucked in the head, I tell ya, it’s sick.”

I had ignored another warning from my boss again. I simply figured what she told me was some sort of exaggeration, or maybe she got it wrong. She had told me that before going up to Tony’s apartment I must always REMOVE ANY COINS from my pocket and leave them on my desk. The first time it came up I laughed and shrugged, but did as she requested. I’m not some sort of rebel, after all. But after that, after I had dealt with Tony a few times he seemed like such a nice guy I decided that I’d heard her wrong. Her warning was a little too hyperbolic. Tony didn’t like the sound of jingling coins. That’s eccentric, but he’s an artist and great artists are sensitive. Okay, I’ll make a reasonable effort not to jingle too much. So: next time I left the coins in my pants.

Big mistake. He heard them. I had self-consciously tapped my pocket as I left: “Welp, gotta go.” CLINK. Tony read such moments as provocations, conscious head games. He thought people intentionally rattled change in their pocket to remind him that he used to be poor. He thought people everywhere, doormen, chauffeurs, roadies, flunkies — were insulting him, laughing at him. Somehow it didn’t much matter that he was rich and they WERE poor, or not far from it. They were laughing at his poverty with a vast coin-jingling conspiracy. Everyone was in on it.

It was ugly and unsettling when you tripped off one of these land mines. Think about it. It’s Tony Bennett — happy, smiling, warm, lovable Tony Bennett. He is that way — the way you think when you think of “Tony Bennett” —  most of the time. But then occasionally, these small, seemingly insignificant actions flip a switch inside him and he turns, like that shark in Finding Nemo when he smells a drop of blood. Having this American icon turn his malevolence on you is like being at Mount Rushmore, and then  Abraham Lincoln turns to you and goes: “Put that fucking cup of lemonade DOWN. You think lemonade is funny? You think Abraham Lincoln is some kinda joke to you, that you can drink lemonade to him?!”

When you don’t have coins in your pockets, Tony also gets bent out of shape if your hands go NEAR the pockets that don’t have change in them, because then you are still sending him some sort of loaded signal. He once chewed out his double-bass player, a sweet Christian man who was wearing a JOGGING SUIT at the time — an outfit with not only no coins, but no pockets! The guy got dressed down by Tony because of the change he WOULD be jingling in his pockets, that is, if he’d had change or pockets. After that one and only time I inadvertently brought  some nickles and pennies up to Tony’s apartment and set off a tirade, you can believe me when I say that I never did it again. But that didn’t matter. Because now I was self conscious, and my hands would automatically go near my pockets as though carried there by evil imps who wanted to have me killed. Well truthfully where can they GO? Your pockets are built to be near your hands. To get your hands away from your pockets, you have to rest them on your head or something, like during a stick-up. But here’s another thing.  Tony, like a lot of people in show business, wears a piece. No, not a codpiece. (He doesn’t require that — he’s Italian.) I mean a toupee. So anything to do with the head, the hair, is also verboten. So, even if you’d moved your hands from your sides to your head, he’d have gone “SO! I’m BALD, am I?” You couldn’t win. The only way you could win is by doing like Lon Chaney in The Unknown and chop off your arms. But if you’ve seen that movie you know what happens next. Tony would inevitably then say, “What? No pocket change?”

It was a little nerve-wracking. So my hands would go near my pockets and he would go “Aha! Caught you!” and I would say, “Well, you make me nervous, Tony” and he would say “Well, you make ME nervous.” Which was probably true. Like I said, he’s a great artist, I never denied that, and it’s a “Princess and the Pea” thing, which I get. Certain things drive him bonkers, and I use the word advisedly. He’s always got to be “on” and whether he’s on or off, he wants things just so. Most of the Big Ones have such things. I’m told Bob Hope, one of Bennett’s mentors, had a similar sensitivity about the size of his nose. But what hurts and angers is the implication that you are intentionally trying to gaslight him. He winds up sort of gaslighting everyone else, and the atmosphere is one of unreality, a paranoia that would not seem amiss in the pages of Orwell. The floor is paved with eggshells. And anyway, who does that, who intentionally tries to freak a celebrity out? I can maybe see their own competitors doing that — they might have some reason to sabotage their rival a la Valley of the Dolls or All About Eve. But underlings, whose living depends on the well-being and happiness of Mr. Tony Bennett? Think it through, man!

Anyway this was over thirty years ago. I’m sure he’s much saner now at [whatever age he is now], right? There’s other stuff too…but that would be tellin‘. Another time.

Anyway, for some more positive thoughts on a cat with a great set of pipes, see Tony Bennett, Part One.