Napoleon and the Comedians

One of the most important cinematic and theatrical experiences of my youth was the time my dad took me to see the roadshow of Abel Gance’s 1927 silent masterpiece Napoleon when it came to the Providence Performing Arts Center in 1980. Kevin Brownlow had restored it, and Francis Ford Coppola’s Zoetrope Studios had re-edited it and released it with a live score composed and conducted by Coppola’s father Carmine. This was a big deal at the time. The film hadn’t been seen in the U.S. in like 50 years. And the film is both problematic and spectacular to show — part of it is done in triptych, requiring three separate screens. This tour was done with a live orchestra conducted by Carmine Coppola himself. After the event I got a copy of the poster and then went backstage after the show and got the elderly Mr. Coppola to sign it. It hung in my room throughout the rest of high school.

I was around 14 at the time, at the height of my alienation, and just beginning to discover “culture”. I was becoming further and further estranged from my father then, and that would continue for many years. But I’ll always remember that occasion as a time when we came together. He made a touching effort to connect with me, and it was something we could both get excited about. (Funny, I didn’t think about this incident when writing about Chain of Fools…probably because the film, though silent, contains no fools).

But the subject of Napoleon has inspired several notable fools!

For many years Charlie Chaplin had planned to star in a movie about Napoleon (see above). Afters years of thinking and planning, he finally folded the idea into something more topical, a comedy about Hitler he called The Great Dictator. Here is an interesting little film on the subject:

Chaplin wasn’t the only twenties comedian to want to take on the French dictator. Groucho Marx’s lampoon of Napoleon was considered the highlight of the Marx Brothers’ breakthrough 1924 Broadway show I‘ll Say She Is! Curious? Of course you are. Well, guess what, you can read the entire sketch right here – – and furthermore, you WON’T BE DISAPPOINTED: http://www.marx-brothers.org/marxology/napo1.htm 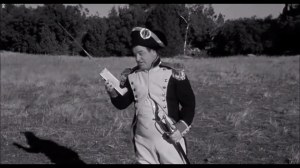 Not to be outdone Lou Costello impersonates the Little Tyrant in his 1959 solo swan song The 30 Foot Bride of Candy Rock during a time travel sequence. Thank you Matthew Coniam, for reminding me.  Look for his upcoming book (with Nick Santa Maria) The Annotated Abbott and Costello!

James Tolkin is hilarious as Napoleon (and Napoleon’s double) in Woody Allen’s 1975 film Love and Death. Love and Death is probably my favorite Woody Allen movie, a sort of inspired mash-up of epic comedy in the tradition Keaton’s The General with Russian literary epics like War and Peace.

Lastly, let us not forget Ian Holm as the Emperor in Terry Gilliam’s Time Bandits (1981), who delights in “leetle theengs heeting each other” — namely dwarves and puppets. Holm wasn’t a comedian per se, but like all the best English actors, could be as funny as the people who normally call themselves by that professional attribution.

Please check out my book: Chain of Fools: Silent Comedy and Its Legacies from Nickelodeons to Youtube, released by Bear Manor Media, also available from amazon.com etc etc etc