An Awesome Review by a Writer Who Gets It 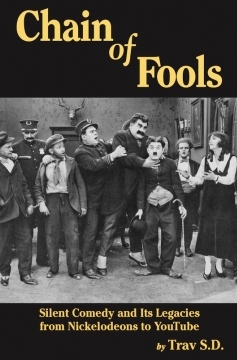 I’m going through a bit of a course correction on how I market Chain of Fools going forward. Left to my own devices to promote it, I’ve had to conceive and execute a campaign almost entirely on my own. In this first leg I made the (understandable, I think) strategic error that the silent comedy fan community would be a natural, almost no-brainer, fish-in-a-barrel community to hawk it to. It’s proven to be quite the opposite, for reasons that should have occurred to me from the outset.

As I said at a couple of the early launch events, Chain of Fools isn’t a fan-boy book. It’s more like a kind of manifesto for aspiring comedy film-makers, a half-time pep talk for clowns, and a grounding for the broader cinephile, with an emphasis on theatre and cultural history which most film books lack. However, the critical response from most of the silent film blogosphere has ranged from indifferent to cursory to (at best) obtuse, which I ought to have seen coming. Most of them who have written about the book either appear not to have read it at all, or to possess some expectation that, despite the fact that it is being written by a professional New York critic, that the writer (me, I) will not bring any critical attitudes to the artists or the films he is writing about. That’s not what they are accustomed to. It looks like I’m going to have to make an end run around this little subculture.

As I say in the book’s intro, the importance of silent comedy films is not that they belong in some ghetto, under glass, to be appreciated by a fraternity of monks and treated with canonical reverence. Their REAL value is to be plundered by contemporary clowns and comedy film-makers, and enjoyed by the WIDER mainstream public. There was a Renaissance in comedy a century ago, and the current state of the American comedy film is doleful. HERE is the blueprint for a New Dawn in American comedy.

And I was ecstatic this morning to read the first in-depth review that thoroughly gets it, like on every level. It’s helped me clarify who my potential readers are. Thanks, Danny Bowes! Here’s the review.