Today is the birthday of comic character actor Tom Kennedy (1885-1965). Like Edgar Kennedy, to whom he is no relation, he started out in the fight game; boxing provided his entree into show business. According to Brent Walker’s Mack Sennett’s Fun Factory Kennedy had sparred with Jack Johnson in vaudeville for several weeks in 1910.

He found his way into movies training Douglas Fairbanks for a couple of his early comedies The Lamb and Double Trouble in 1915, and appeared in them as well. From here he went over to the Sennett division of Triangle, where he was to remain for four years, supporting the likes of Mack Swain and Roscoe Arbuckle. After the Sennett period he worked variously for Fox Sunshine comedies, Paramount, Educational and others. 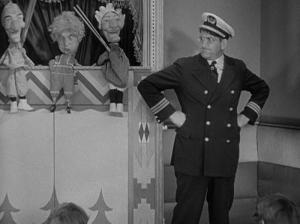 Kennedy continued to play bit parts in film and television three decades into the sound era, most famously as the bespectacled ship officer in the Marx Brothers’s Monkey Business (1931), and regularly appeared in “Torchy Blane”, “Mexican Spitfire”, Edgar Kennedy, and Bowery Boys comedies, among others, as well as the occasional classic, like W.C. Fields’ Poppy (1936) and Bob Hope’s The Paleface (1948). One of his last roles was in It’s a Mad, Mad, Mad, Mad World.

To learn more about silent and slapstick comedy, including great ensemble players like Tom Kennedy. please check out my new book: Chain of Fools: Silent Comedy and Its Legacies from Nickelodeons to Youtube, just released by Bear Manor Media, also available from amazon.com etc etc etc