Today is the birthday of Woodrow Wilson Guthrie, better known as Woody. I first learned about him in third grade from a very groovy music teacher (it was 1973), but didn’t really get heavily into his music until my early twenties. My best friend in high school’s parents were serious folk fanatics, their old records provided the education. His Dust Bowl Ballads were a huge influence on the songs I created for my play House of Trash in the 1990s, and more recently  for The Ballad of Jasper Jaxon. We did a musical tribute to him in our show last year Travesties of 2012 in the New York Musical Theatre Festival. 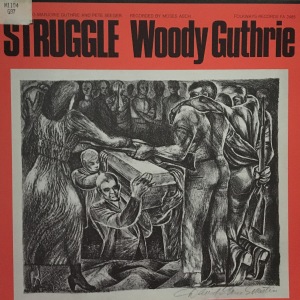 Woody wrote hundreds of songs, and their strong narrative content helps create a sense of mythos and legend that sort of reinforce the idea that he’s an old-time character, perhaps from the 19th century. But he’s fully a 20th century one (1912-1967), and was a full participant in modern American show business. His meat and drink was performing on the radio and recording albums, and if he hadn’t gotten sick he would have been a fixture on television just like his contemporaries Pete Seeger and Burl Ives.

At any rate, seeing as it’s Sunday and since I’m sick unto death of hearing of hearing some people (from every side of the aisle) misappropriate, misrepresent and generally mishandle the religion of my Fathers, here’s a song by a not particularly religious man who gets it better than they do.