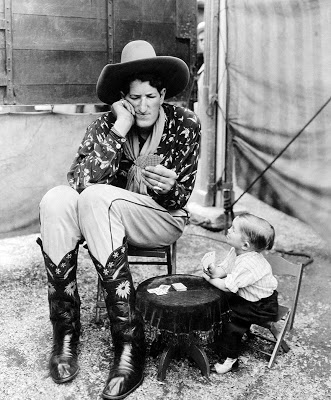 Today is the birthday of Jack Earle (Jacob Ehrlich, 1906-1952). Born underweight, he was small for his size until his seventh birthday when a growth spurt suddenly began that made him six feet tall by his tenth birthday. 7 feet 7 1/2 inches was to be his eventual height.

His career also enjoyed a similar rapid beanstalk-like growth. In show business terms he shot straight to the top, directly into films, bypassing sideshows entirely (at least initially). At the age of 16 he was hired by the Century Film Company to appear in comedy shorts and children’s films such as Jack and the Beanstalk (1924). He made over two dozen films when he was in Hollywood, his last being Larry Semon’s Stop, Look and Listen (1926). An accident cut short his film career; a fall resulted in a damaged nose and the temporary loss of eyesight, which turned out to be from a pituitary tumor that was pinching the nerve. Radiation treatments shrank the tumor, restoring the eyesight and stopping the out-of-control growth at the same time.

From here he went into sideshows and circuses (including Ringling Bros, Barnum and Bailey) from 1926 through about 1940. Originally from Denver, his family settled in the El Paso area which is where the “Texas” comes in. After retiring from show business he worked as a wine salesman, p.r. man, and deputy sheriff. In his spare time he made art.

His nephew Andrew Ehrlich wrote a novel about his life called The Long Shadows which you can read here: http://thelongshadowsbook.com/

And there’s a film item about Jack from 1928; you can see it on Youtube.