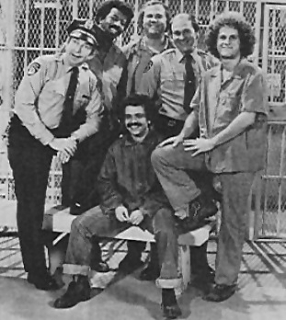 Here’s one that’s been totally swallowed up by the swirls and eddies of time, so much so that I can’t even find any clips of it online. On the Rocks  was a sit com about a bunch of lovable, huggable inmates at a minimum security corrections facility, and the prison guards who love them. How very 1970s! They’re not bad guys! They’re just like you and me, only they got a few bad breaks! There’s Fuentes, the lifer (Carlos Perez), DeMott, the black brother (Hal Williams), Bobby the newbie (Nicky Palik) and Cleaver, the lovable, huggable dumb redneck (Rick Hurst). And tv veteran Tom Poston played a guard. It’s just like Oz, but with less homosexual rape!

The network hyped the hell out of it, it was quite high profile, and I was a loyal watcher. There were some funny gags. When the newbie Bobby gets thrown in jail in the first episode (he’s kind of our Nick Carraway) it’s for multiple counts of car theft — he stole one of those flatbed trucks that was transporting automobiles to a dealership. A typical episode revolved around Fuentes getting bent out of shape because someone stole his can of crushed pineapple. All in all, the show was probably done in by the inappropriate match of the setting and the lightness of the medium. You would think, but then again, that never stopped Hogan’s Heroes!