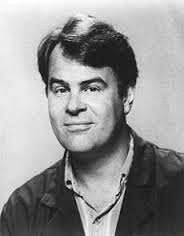 Today is the birthday of Dan Aykroyd (b. 1952). Aykroyd is a comedian with a genius so peculiar that mainstream show business hasn’t known what to do with him, and he clearly hasn’t known what to do with himself either. I think he is brilliant — he should have been simply given toys to play with and left alone, so that he could grow naturally from his only years of true brilliance (1975-1982, his period on Saturday Night Live and his early films with John Belushi).

Belushi was clearly some sort instigator and catalyst for Aykroyd’s demented id; the latter seemed to be riding in the sidecar on Belushi’s reckless, kamikaze journey. That said, Aykroyd was such an original, he was the farthest thing from dead weight. A criminology major in college, he had a love of arcane language, jargon lifted from science textbooks and machine manuals , and all sorts of occult weirdness. He wasn’t just funny, he was “out there” and this made him one of the most important engines of the early SNL machine.

Beyond this, he was an insane performer, very high energy (almost Asperger-y), and he was the first cast member on the show to carry around a gallery of half-way decent impressions (e.g., Richard Nixon, Jimmy Carter, Rod Serling, Tom Snyder). Aykroyd’s impressions were amusing not because they were spot-on, but because they were his own “take” on somebody. With Nixon, he captured the creepy, mirthless smile. With Serling the tightening of the upper lip. With Snyder, the sycophantic laugh. On top of that there were his original characters like The Coneheads, Leonard Pinth-Garnell and oddments like his most notorious sketch, the fake ad for the Super Bass-O-Matic ’76. 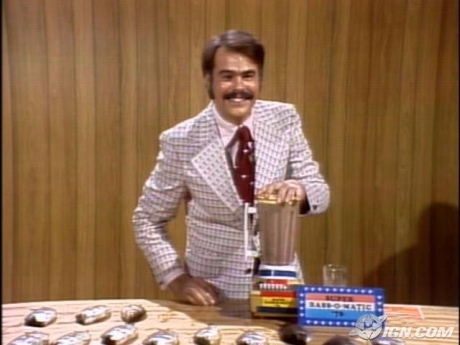 Okay, this person was clearly a writing and performing genius.

Early attempts by Hollywood to harness this talent in films were sensible. The part of D-Day in Animal House (1978) was written for Aykroyd, and that would have been a PERFECT use of his talents (contractually tied to SNL, he opted to remain in New York. Belushi had no such compunction and the rest, as far as that goes, is history). I love Aykroyd’s little turn in 1941 (1979) — for me it is one of the best things about that noisy, messy movie. Naturally I love him in The Blues Brothers (1980) and Neighbors (1981). And I love his little cameo in Indiana Jones and the Temple of Doom (1984). But I have a hard time watching most of what happened afterwards…

Likewise I don’t like what the Hollywood sausage factory does to his eccentric visions as a writer. I feel like they adulterate his weirdness and make pablum out of it to make it palatable to the masses. Knowing Aykroyd’s real-life devotion to spiritualism and the paranormal, I was very disappointed by Ghostbusters (1984) and its sequel (1989), which made me feel like I was being held by the hand and spoonfed. Encapsulated by Ernie Hudson’s final line in the closing line in the original film, “I love this town!!” I’m sorry — was this a movie about New York? And is New York generally characterized as full of ghosts? And was the star of the movie Ernie Hudson? Nah, it was just a bunch of producer crap that came out of the pen of a committee to send the audience out whistling the Ray Parker, Jr theme song. There is more of Harold Ramis in it than of Aykroyd to my mind, and more’s the pity. I don’t give a damn how much money it made.  I had a similar disappointment in Dragnet (1987). I felt all originality and fidelity to the original was strained out of it in order to cater to the sensibilities of ticket-buying children. Crowd-pleasing is fine, but I vastly prefer the weirdness of Aykroyd. And on SNL it seems to me he was plenty crowd-pleasing.  Why dilute what he has to offer? I prefer to be disarmed and bewildered, forced to think and confront something new. I seek out experiences that do that for me, and I have a lot of scorn for those that don’t.

The sad fact that in later years Aykroyd had to resort to Coneheads (1993) and Blues Brothers 2000 (1998) speaks for itself. I bet he’s had one or two good, original ideas since the 1980s that weren’t thirty or forty years old. How toxic is a machine that can’t accommodate a guy as funny as Dan Aykroyd?

What I would love to see him do is reality television — especially on topics of the supernatural, alien visitation, cryptozoology, true crime, anything like that. That would rock. And it would be a vast improvement over the ignominious way Hollywood has misused his talents. Case in point: his most recent high-profile gig, providing the voice of the title character in the recent Yogi the Bear re-make (2010).

POST-SCRIPT (7/9/13):  I chanced to see Aykroyd’s one directorial effort Nothing But Trouble (1991), which illuminated, and invalidated much of what I wrote above. It turns out Aykroyd HAS had artistic freedom in Hollywood — and his vision was so off putting that he hasn’t been allowed to exercise it since. Read my comments on that movie here.

POST-POST-SCRIPT (2021): When Elon Musk was on SNL recently he claimed to be the first person with Asperger’s to be on the show. But many people pointed out, nah, that was Aykroyd. And I found that so illuminating! Of COURSE! It took forever for that to seep into into my mind. Certainly it forms his comedy — so much that he did on SNL, and certain very peculiar things like Dr. Detroit. But if you’re just part of the audience, you think of his characters as just part of his ACT, his COMEDY. For example when I saw him on The Tonight Show in 1984, I assumed that his very strange schtick was just him doing a routine. After all, he had said similar things in Mr. Mike’s Mondo Video. I assumed he was pulling stunts, in the vein of Andy Kaufman. But in recent weeks I have watched him and heard him in much more laid back longform settings, like his Mark Maron interview in 2021 and another Covid era interview he did on one of the late night shows. His obsession of the moment is Crystal Head Vodka, his own product, which he hawks just as enthusiastically as if it were a Super-Bass-o-matic. And a light dawned. OH! This is how he really is! It only makes me love him more.

To find out about show business (including tv variety shows like Saturday Night Live), consult No Applause, Just Throw Money: The Book That Made Vaudeville Famous, and for more on classic comedy, check out my book: Chain of Fools: Silent Comedy and Its Legacies from Nickelodeons to Youtube, just released by Bear Manor Media, also available from amazon.com etc etc etc