Of “Good Times” and the Deployment of Dyn-O-Mite 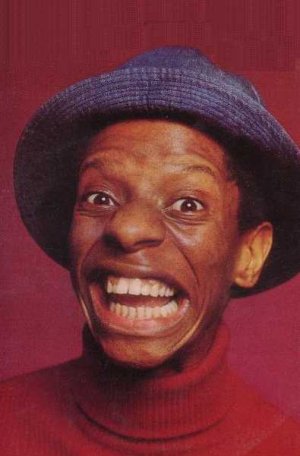 Today is the birthday of Jimmy “J.J.” Walker (b. 1947). The jury is still out — did he set the cause of civil rights back 30 years? One thing is certain in retrospect: in the 1970s black representation in the media suffered a setback of sorts. While thankfully there was MORE of it than ever before, much of it had slid from some of the more positive strides made in the 60s by the likes of Sidney Poitier and Diahann Carroll. While undeniably funny, television comedians like Walker, Redd Foxx and Sherman Hemsley seemed in many ways like updated versions of Mantan Moreland, and Amos ‘n’ Andy. 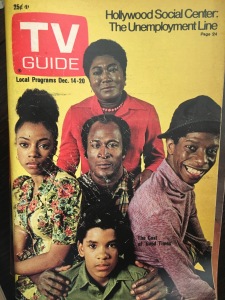 The irony being that Walker’s show Good Times (1974-1979) was originally conceived of as a topical program, a rare and unprecedented opportunity to humanize people of color living in the housing projects. 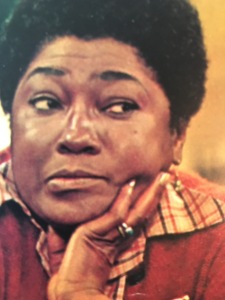 The show was spun off of Maude, transplanting the Findlay’s African American maid Florida (Esther Rolle) to Chicago with her husband James (John Amos) and three kids. Their sassy colorful neighbor was played by Ja’Net Dubois. Another foil was “Bookman”, played by Johnny Brown. 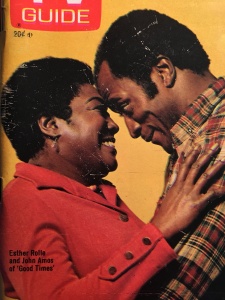 Rolle and Amos had signed on for what they hoped would be a meaty and groundbreaking show, and Good Times did occasionally deal with serious topics. But the breakout phenomenon turned out to be stand-up comedian Walker, with his foolish looking pimp gear and his shucking and jiving catchphrase “Dyn-O-Mite!”  When we were 8 or 9 years old we thought this was the height of sophisticated wit (and we were encouraged in that belief by this cover story in Dynamite magazine in 1975): 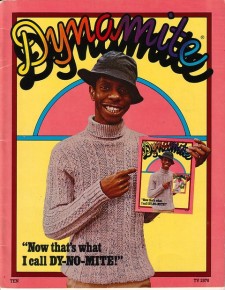 I can’t help reflecting though that I personally drifted away from the show pretty rapidly. My tastes were frankly already too sophisticated by the time the show was getting into its later seasons, which to my mind says more about television than it does about me. I preferred satirical sit coms like When Things Were Rotten and Quark : shows with a sensibility much closer to  my beloved Mad magazine. Good Times seemed only to offer, on the one hand, didactic soap opera, and on the other, repetitive comedy far too dumb for an eleven year old. And that, my dears, then and now, is one of the best recipes for a hit.