Sammy Cahn: A Sense of Vaudeville 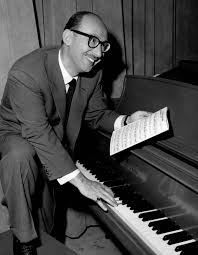 What a great day for songwriters! Not only Louis Alter and Con Conrad, but also Sammy Cahn (Samuel Cohen, 1913-1993). Cahn came along a little too late for vaudeville, but he did attend constantly as a teenager and learn from it and later says “I think a sense of vaudeville is very strong in anything I do.” He also had some of his earliest songs performed in vaudeville, as when Jack Osterman sang “Like Niagra Falls, I’m Falling For You”. He also wrote special material for Milton Berle, Danny Kaye, Bob Hope and Phil Silvers.

Though he had a musical background (he’d played violin in a burlesque pit orchestra and in Dixieland bands that toured the Catskills, and also knew his way around a piano), he would become known as a lyricist who usually worked with musical collaborators such as Saul Chaplin, Jules Styne, and Jimmy Van Heusen. He began to enjoy success in Hollywood in the mid 1930s. His list of songs is too long (and hopefully too well known) to list here, but some of them include “Three Coins in the Fountain” (1954), “Love and Marriage” (1955, later used for Married with Children), and “Let it Snow, Let it Snow, Let it Snow” (1945).

He was one of the few working within  the tin pan alley aesthetic to take it quite far past the advent of the rock era. For example, I was surprised to learn this morning that “My Kind of Town (Chicago Is)” was written in 1964! And Cahn was still crankin’ ’em out long, long after that. For example, this song “All That Love Went to Waste” was written for the 1973 film A Touch of Class (and nominated for an Oscar)