Stringbean was one of the key performers on the syndicated country variety show Hee Haw from 1969 until his death in 1973. A top notch banjo player and comedian, he’d gotten his professional start playing barn dances and the like in the 1930s, until he worked his way up to Bill Monroe’s band (1943-1945) and the Grand Ole Oprey (of which he was a fixture until his death).

His nickname of course came from the fact that he was so tall, thin and lanky. His most memorable recurring bit on Hee Haw  was as a scarecrow with a cawing crow on his shoulder. 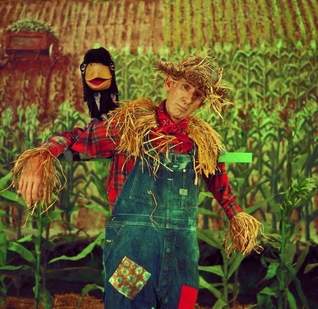 Another recurring bit was a humorous “letter from home” which he would keep “close to his heart” (which would turn out to be his back pocket).

In 1973 the world was shocked to hear that Stringbean and his wife had been violently murdered by a couple of lowlife thugs who’d gone in to rob him at his rural Tennessee farm house. There were a lot of celebrity murders during those years, usually committed by bottom feeders who’d made the mistaken assumption that performers they saw on TV would be keeping big piles of cash and jewelry and other vaulables in their houses. But honestly if you’d the second story man who’se just dying to get his mitts on the big Stringbean fortune, that’s got to be its own punishment,

To find out about  the history of variety performance, consult No Applause, Just Throw Money: The Book That Made Vaudeville Famous