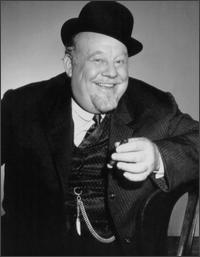 Today is the birthday of Burl Icle Ivanhoe Ives (1909-1995). This beloved American figure began his life as an itinerant folk-singer in the early 1930s, rising to enough prominence that by 1940 he had his own radio show The Wayfaring Stranger, on which he popularized such old American standards as “Big Rock Candy Mountain”, “Foggy, Foggy Dew” and “Blue Tail Fly (Jimmy Crack Corn)”. My dad had recordings of Ives singing these and other songs; I listened to it a lot as a kid.

In the 40s, Ives was very much associated with fellow folk singers Woody Guthrie, Pete Seeger, Will Geer and others via The Almanac Singers. The anti-communist hysteria of the Cold War initially resulted in a blacklisting for Ives. He later testified before HUAC without naming names; he and his former associates distanced themselves from each other thereafter.

Meanwhile, Ives went on to become a movie and television star. His uncommonly pleasant voice, and his Santa Claus like appearance (stout, bearded and merry — he even smoked a pipe) filled a needed niche in the kind of movies Hollywood was making at the time, films much in tune with the image he’d cultivated as a folksinger. The fact that he turned out to be an excellent actor, sealed the deal. Ives gave iconic performances in such films as East of Eden (1955), Desire Under The Elms (1958), Cat on a Hot Tin Roof (1958), The Big Country (1958), Our Man in Havana (1959), and Ensign Pulver (1964). And of course his most loved performance today, the snowman narrator from Rudolph the Red Nose Reindeer (1964), in which he sings the title song, “Silver and Gold” and “Holly Jolly Christmas”. From 1965 to 1966 he starred in his own sitcom O.K. Crackerby, the name of which is too priceless not to share.His last role was in Two Moon Junction (1988).

To find out about  the history of show business, consult No Applause, Just Throw Money: The Book That Made Vaudeville Famous, available at Amazon, Barnes and Noble, and wherever nutty books are sold.