Frank Morgan: Beyond the Wizard of Oz

A tribute today to beloved character actor Frank Morgan (Frank Wuppermann, 1890-1949), best known as the title character in the 1939 motion picture The Wizard of Oz — and one of this writer’s idols.

Unlike most performers in these annals, the way to fame for Frank Morgan was paved with yellow brick. His father was the wealthy manufacturer of Angostura Bitters. Back in the day, this product was widely regarded as something of a patent medicine, giving a kind of meta quality to Morgan’s performances in things like The Wizard of Oz and The Wild Man of Borneo.

Frank’s older brother Ralph had already been a successful actor for 5 years when Frank made his Broadway debut in 1914. Whatever small amount of struggling needed to be done was born by the older brother.  As is palpable on screen, Frank had a firm grounding in the theatre. He was to star in over two dozens Broadway plays through the early 1930s. The most famous of these today is Anita Loos’s Gentlemen Prefer Blondes (1926). Another of them, The Triumph of X (1921) was written by his brother Carlos Wuppermann.

His film career began two years after his stage career. Thus his first 19 films are all silents, and like his pal John Barrymore, he alternated stage and silent film roles at the same time (his first several films were directed by Barrymore’s cousin S. Rankin Drew).

The talkie era coincided nicely with Morgan’s middle age, and that was the age that suited him best. It’s how we think of him: stout, red-cheeked, jolly, convivial, somewhat befuddled, and possessed of that distinctive husky voice (tempered by stage diction) that gives the impression that he has given an awful large number of after-dinner speeches. (Morgan was a drinker; he was said to have carried a small suitcase containing a mini-bar wherever he went.)

Memorable films included Hallelujah, I’m a Bum (with Al Jolson and Harry Langdon, 1933), Naughty Marietta (1935), The Great Ziegfeld (1936), The Wizard of Oz (1939), The Wild Man of Borneo (1941), and The Three Musketeers (1948). He was playing the role of Buffalo Bill Cody in Annie Get Your Gun in 1949 when he was fatally felled by a heart attack, thus depriving us of what potentially would have been one of his most magical performances. I’ve seen the one scene he shot (it’s an extra with the Annie Get Your Gun DVD), and yeah, it would have been great.

I learned to my delight that he is buried at Green-wood Cemetery, which is right near my house. Here is where he lies: 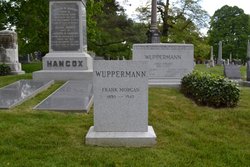