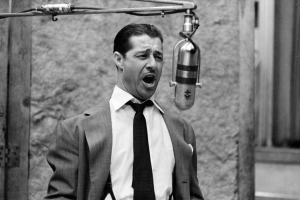 Today’s is the birthday of Don Ameche (Dominic Amici, 1908-1993). Ameche got his start performing in college theatricals in his native Wisconsin. From here he traveled with a stock company in a play called “Excess Baggage”, and then toured big time vaudeville in an act starring Texas Guinan. (Guinan later let him go, saying he was “too stiff”, which sounds about right).

Not long after (1935), the dashing, gentlemanly Ameche began to get cast in Hollywood movies. Notable films included One in a Million  (1936), In Old Chicago (1937), Alexander’s Ragtime Band (1938), The Three Musketeers (1939), The Story of Alexander Graham Bell (1939), Swanee River, in which he played Stephen Foster (1939), Lillian Russell (1940), Down Argentine Way with Carmen Miranda (1940), and the original Heaven Can Wait (1943). The Story of Alexander Graham Bell was such a smash hit that for a while “Ameche” was slang for “telephone”, although I guess people quickly realized that it’s just as easy to say “telephone”.

Ameche was also a major radio star, guesting on most of the popular shows of the day, and co-starring with Frances Langford in the sit-com The Bickersons. Today seems to be a big radio day (see today’s earlier Fred Allen post.) I’m a big fan of The Bickersons, I think it’s quite rudely hilarious, and I’m kind of surprised no one has remade it, although in a certain way ALL modern sit-coms are riffs on The Bickersons. Just Google it — there are tons of places to listen to the show online.

Ameche also appeared on Broadway a half dozen times, most notably in the original 1955 production of Silk Stockings.

From 1961 through 1965 he hosted the NBC television program International Showtime, a show in which he gave play-by-play commentary on European circuses. He continued to act in television and films throughout the films, although work started to dry up in the early 70s. And then (as most readers know, I’m sure) his career enjoyed an impressive third act, when he starred in several successful films, Trading Places (1983), Cocoon (1985), Harry and the Hendersons (1987), Coming to America (1988), Things Change (1988), Cocoon: The Return (1988), Corrina, Corrina (1994) and many others.

To find out about the history of vaudeville, and stars like Don Ameche who got their start there, consult No Applause, Just Throw Money: The Book That Made Vaudeville Famous, available at Amazon, Barnes and Noble, and wherever nutty books are sold.