Christopher Lee: Prepare to Be Exsanguinated

Yes!  It’s really true! Christopher Lee’s birthday is the same as Vincent Price’s, and it’s one day after Peter Cushing’s! You can almost feel the Cosmos saying “Let there be horror…I will it to happen!”

Born in 1922, Lee bypassed the theatre entirely, going directly into films. He soldiered on in small, undistinguished roles for a decade before his ample height (6’5″) got him cast as the monster in Hammer’s Curse of Frankenstein (1957). 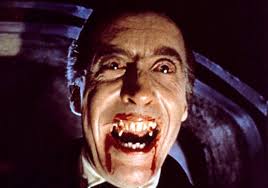 The following year, his striking good looks and piercing, hypnotic eyes made him the natural to play the title role in that studio’s Dracula. Lee was to play the fanged one in several subsequent films; so closely identified with the character is he, that it’s hard for me to visualize him in any other, although I have of course seen many other of his films. Other related outings for the studio included The Mummy, Rasputin the Mad Monk and several Sherlock Holmes films. The late 60s saw a series of very politically incorrect Fu Manchu films.

The 1970s allowed Lee to diversify out of the Hammer neo-Gothic universe. The Wicker Man (1973) was a very new kind of horror film for Lee, less supernatural than naturalistic. That year he was also the villainous Rochefort in The Three Musketeers. He followed up the hot streak the following year he was the villain Scaramanga in the James Bond film The Man With the Golden Gun. He actually plays a heroic part in the disaster movie Airport ’77. He was a Nazi submarine captain in Steven Spieberg’s 1941. The 80s and 90s saw mostly schlocky tv and film work, but then he rebounded in a huge way at an age when most actors are retiring at the turn of the present century, with great roles in Tim Burton’s Sleepy Hollow (1999), and recurring parts in the Star Wars and Lord of the Rings franchises. He finally gave up the ghost in 2015, and kept working right up until the end.