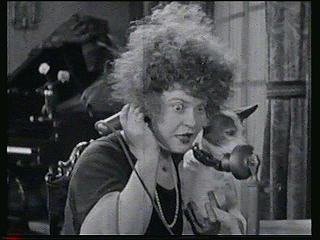 Today is the birthday of one of America’s first female comedy stars, Alice Howell (Alice Clark, 1886-1961). A New York City native, she appeared in vaudeville and musical comedies until her husband and partner Dick Smith’s ill health necessitated a move to a warmer climate. They moved to Los Angeles, where Howell and Smith were hired by Keystone in 1914. They immediately began appearing in small roles in comedies starring the likes of Charlie Chaplin and Mabel Normand. Howell’s ludicrous appearance (she was 5’2″ , with a large mat of frizzy hair piled on top of her head) rapidly helped her gain attention; the fact that she was also a funny comedienne was not immaterial, either. At any rate, though just a bit player, she stood out In Keystone comedies like Caught in a Cabaret, Caught in the Rain, The Knockout, Mabel’s Busy Day, Mabel’s Married Life, and Tillie’s Punctured Romance. In a couple of them (Laughing Gas and Shot in the Excitement) she plays much bigger roles, to good and funny effect.

Pathe Lehrman was the first producer to spot her potential and star her. Starting in 1915, she moved through a succession of situations at various studios, L-KO, Universal, Emerald (her own company), Reelcraft, and then freelancing. You can see many of them on the DVD set The Alice Howell Collection, which we reviewed here.

Howell’s last film was 1927’s Society Architect for Fox. With her distinctive comedy walk and personality, she was often called such things as “the female Charlie Chaplin” but Chaplin’s degree of superstardom was not to be her portion. No matter — she had invested her money in real estate. By the time sound came in, she had amassed much property, and she was to spend the remainder of her working life managing her holdings.

Howell’s daughter Yvonne also got her start working for Mack Sennett as a Bathing Beauty. She was to marry George Stevens, then a cinematographer for Hal Roach, then later a major film director himself. Yvonne Stevens passed away in 2010 at the age of 107.

For more on silent and slapstick comedy please check out my book: Chain of Fools: Silent Comedy and Its Legacies from Nickelodeons to Youtube. To find out about the history of vaudeville, in which Alice Howell performed with her husband Dick Smith, consult No Applause, Just Throw Money: The Book That Made Vaudeville Famous

Also: Steve Massa’s books Lame Brains and Lunatics and Slapstick Divas devote whole sections to Alice Howell. And there’s also She Could Be Chaplin! The Comedic Brilliance of Alice Howell by Anthony Slide.