The Only Post You’ll Ever Need About L. Frank Baum

For a time during my childhood, at an age far too old to have been healthy, I believed that Oz was a real place. This may be credited both to an unhappy childhood…and to the unparalleled imagination of Oz’s creator, L. Frank Baum, who was born on this day in 1856.

Baum’s first love was the theatre. While he worked in stores, raised poultry and did similar quotidian work to earn a living, as early as the late 1870s he was already acting in and writing plays in his native upstate New York. When a theatre he owned burned down in 1882, it was a setback to his ambitions, but he would return to them in a major way as soon as the opportunity presented itself.

In 1888, he moved his family to the Dakota territory, where he was a storekeeper and newspaper editor. This was literally the Wild West (about 15 years after the events in Deadwood) and from his experiences there, Baum would derive that bleak, wilderness flavor that informs Dorothy’s adventures in the first Oz book. It also is the time of our one potential black mark on Baum’s character. As editor of the local paper, he wrote approvingly, even enthusiastically, of extermination of the local Sioux Indians, although some have argued that the piece was perhaps intended ironically. The incident was isolated and Baum was progressive in many more benign ways, especially in the cause of feminism.

After Baum’s business failed (as they always did), he and his family moved to Chicago in 1891, working for newspapers and trade journals.

In 1897, he brought out his first children’s book, Mother Goose in Prose, with illustrations by Maxfield Parrish. The Wonderful Wizard of Oz came out in 1900 and was such a smash hit Baum wrote thirteen sequels (and successors wrote scores more). Those who know only the 1939 MGM film, or only the first Oz book, can scarcely dream the fully realized complexity of the world Baum created. A world with a complete (if imaginary) geography, populated with dozens and dozens of characters as whimsical and original as the ones we know from the first book: Jack Pumpkinhead, the Wogglebug, Tik-Tok, Bellina, the Shaggy Man, Princess Ozma, and on and on and on. this is why it was possible for me (and I’m sure I’m not the only one) to get completely lost in that parallel universe of hot air balloons and humbug.

In 1903, a version of The Wizard of Oz was brought out as a Broadway musical. The content was completely different from that of the MGM film, but the performance of Fred Stone as the Scarecrow in that stage version was so memorable that it would later inspire Ray Bolger to become a dancer, and to dream of playing the part himself some day. The stage version was a major hit of its day, allowing Baum to finally realize his dream of success in the theatre. 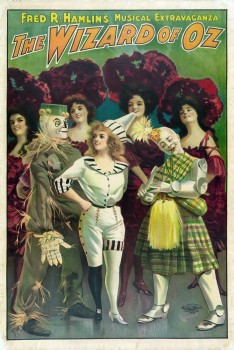 In 1910 he branched out into cinema. Here are my notes on that first film version of The Wizard of Oz produced by the Selig Polyscope Company, which I jotted down a few years ago:

Crude, stage bound. Seems a lot like Melies. Painted stage sets. Lots of capering and frolicking. People in donkey and cow costumes. She meets the Scarecrow while still in Kansas? Oz looks tropical—sort of like the Nile region. The witch’s henchman are flying TOAD  men, rather than monkeys. Charming visually—Munchkin outfits look like Denslow’s ones from the book.

Baum actually moved to LA and  made movies for the remaining decade of life, even as was churning out children’s books at a prodigious rate. He passed away in 1919.

In 1925, silent film comedian Larry Semon made his own version of The Wizard of Oz.

Here are my notes on that:

Any resemblance between this film and L. Frank Baum book is purely coincidental. Despite the fact that the film opens with an old man reading from a book of The Wizard of Oz scarcely any story detail remains intact (although Semon’s nose does resemble Margaret Hamilton’s). In this film, the Wizard is a mere toady of a mean despot named “Emperor Kruel”. Oliver Hardy is in the film, although, amazingly, he is not the heavy. That role can be said to be played by Fatty Alexander, here cast as Uncle Henry, a mean bully! Will the heresies never cease? Farm hands Hardy and Semon are rivals for the affection of Dorothy, who is about to turn 18.

While we are anxiously awaiting the arrival of a plot, Semon runs afowl of a duck who spits animated white liquid in his face; and then a bunch of animated bees which sting his butt, but not before his fundament has been kicked by a mule, sending Semon flying into an enormous patch of cactuses that have mysteriously been transplanted to Kansas. (Semon anticipates Jerry Lewis by wearing inappropriate jewelry—in this case a large ring—that his character would never wear).

There is a third farm hand played by an African-American whose SCREEN name is “G. Howe Black”. You can imagine the kind of comedy this character generates. He is first discovered rolling his eyes and slurping a stolen watermelon. Later he will run through the skies as lightning keeps zapping his butt.

But we are ahead of ourselves. We learn in a flashback that Dorothy is not really related to Henry and Em, she was left on the doorstep as an infant (played by the ugliest baby I’ve ever seen on celluloid). A note in the basket says to open the attached envelope when she turns 18—she is clearly the lost Queen of Oz. Bad guys from Oz come to steal the note before she reads it. (They leave Oz in a tri-plane; arrive in Kansas in a biplane. Must be like heaven, when you leave, you lose a pair of wings.)

The tornado arrives by divine intervention bringing Hardy, Semon, Dorothy, Uncle Henry and the black guy to Oz.  Dorothy learns she is to be queen, but the bad guys show up. Semon hides by dressing as a Scarecrow. Hardy, the Tin Man. They are arrested, but only Semon and the black guy are thrown in the dungeon. Everyone else is perfectly happy about the situation. While Emperor Kruel schemes to marry Dorothy, our friends in the dungeon try to escape. The black guy dresses in a lion costume, thus completing the trilogy and fulfilling aesthetic mandate. The film’s best (or most original) sequence emerges…one I believe resuscitated by Abbott and Costello for Africa Screams. Semon and the costumed black guy (do you WANT me to call him G. Howe Black?) get amongst some real lions. Of course at a certain point Semon will think he is with his human friend and get very saucy and confident with an actual lion. Well…you had to be there.

Anyway, in the end, Prince Kynd (remember him?) has a sword fight and defeats Emperor Kruel, thus making all the other male characters in the plot superfluous.

EPILOGUE: The requisite Semon set piece on towers with the acrobatic swinging of stunt men. Semon’s character jumps onto an airplane just as the tower he is on is smashed by a cannon—this would go in ANY action film today. Back to the little girl’s dream. End.

As I’ve remarked in many places, most of the principle cast members in the 1939 MGM version were vaudeville veterans: not only Bolger, but Judy Garland, Jack Haley, Bert Lahr, Charley Grapewin and even Singers Midgets. Knowledge of this was without a doubt one of the major factors leading me to vaudeville as a principle area of exploration in my life’s work.

Not surprisingly I find myself drawn to people to whom Baum’s stories were important — it’s like a cult. The Countess owns his complete works, putting me to shame (I only had four of his books as a child, discovering the others years later when I got them for my children). (For the Countess’s much more relevant post, in which she talks about Baum’s actual writing, go here). The Brick’s Gyda Arber has said her childhood love for the 1939 MGM movie was what led her into musical theatre. And Edward Einhorn, with whom I worked on many theatrical productions, has actually written two Oz books of his own, thus trumping us all.  Info on how to get Einhorn’s books is here.

Don’t miss my highly relevant books Chain of Fools: Silent Comedy and Its Legacies from Nickelodeons to Youtube, and  No Applause, Just Throw Money: The Book That Made Vaudeville Famous