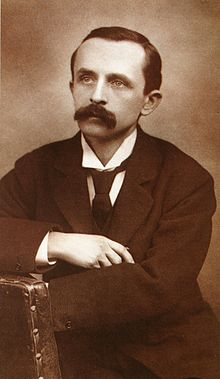 Today is the birthday of Sir James Matthew Barrie, First Baronet, OM (1860-1937). This novelist and playwright had much to his credit besides his most famous creation Peter Pan. Just two things I’d like to throw out there.

Secondly, a few weeks ago I had a wonderful reading experience in discovering Barrie’s 1902 play The Admirable Crichton. This hilarious social comedy weighs the two kinds of aristocracy: the social one vs. the natural one — guess which is found wanting? Crichton is the long-suffering butler to a family of ridiculously pampered, clueless nobles. When they are shipwrecked on an island, the power structure shifts dramatically. And, then, when they are rescued, rather sadly, it shifts again. It’s really a great play, although I would imagine even the most conservative modern sensibility will crave a more “revolutionary” resolution than the one Barrie gives us. Unlike Shaw, he had no desire risk alienating his audience with controversy. You should read it yourself! It’s free online right here.

And now, because you know you want it, this clip. Oddly though Peter Pan was a smash that dated to 1904 it took twenty years to bring it to the screen (similar works were certainly already being made into movies by 1904). Betty Bronson was plucked from obscurity as extra to play Peter in this version, beating out both Mary Pickford and Gloria Swanson. It’s so gorgeous and so charming, I think it may be my definitive version from now on: