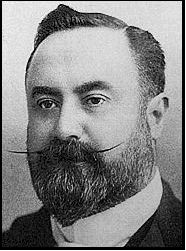 Today is the birthday of the great magician Charles Bertram (b. James Bassett, 1855-1907). He was originally a hotel keeper. When his establishment went belly up in 1882, he turned to magic. Three years later he achieved fame at age 30 with a four month run at St. James Hall, followed by constant performances at Maskelyne and Cooke’s Egyptian Hall. Using the popular catchphrase “Isn’t it Wonderful?” he held the audience in awe with suching illusions as two Buatier de Kolta illusions, the Vanishing Birdcage and the Vanishing Lady, as well as Cups and Balls, and Multiplying Billiard Balls, and numerous others. His assistant was Madame Patrice, who later became famous as a magician in her own right (one of the first women to do so).

In 1899 Bertram launched a grand world tour with an extensive exploration of India, where he learned from local conjurers, and sought to learn the secret of the fabled rope trick (he never did). (This is that famous trick depicted in the 1930 film Chandu the Magician where a rope is made to levitate high in the air, the top not fixed to anything, and then a man climbs it. This miraculous feat seems to have been more a matter of legend then fact). In later years he toured the U.K. and U.S. with music hall artist Albert Chevalier.