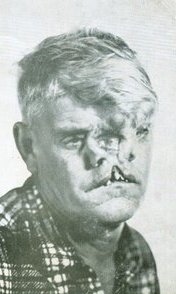 Today is the 100th birthday of Bill Durks (1913-1976), the “Man With Three Eyes”. The irony is that his third eye was painted on with make-up, but he was easily unique-looking enough without it. His condition, known as frontonasal dysplasia, essentially meant that he had a split face: a seriously cleft mouth, and a nose that was divided into two separate parts. His eyes, which were set far apart, had been closed over when he was born and had to be surgically opened up. Only one of them worked.

For his first 40 years he had been a sharecropper in rural Alabama. He never learned to read or write, and he could barely speak due to his condition. He performed with a local carnival before touring with Kelly-Sutton Shows, Goodings’ Million Dollar Midway, Hall & Christ Shows and James E. Strates Shows, and he eventually appeared in Hubert’s Museum in Times Square, and in the 1973 Brian de Palma film Sisters. Durks was married to Mildred D. Durks, the Alligator Skinned Girl and they were billed as the “World’s Strangest Married Couple.” When she passed away in 1968, he retired to Gibtown, the retirement community for carny folk in Florida.