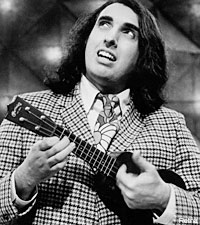 Today we recall that Holy Saint of the neo-vaudeville movement, Herbert Khoury, ak.a. Tiny Tim (1932-1996). You’ll find him reverentially mentioned on page 278 of my book No Applause, Just Throw Money: The Book That Made Vaudeville Famous. Oh, I wish, I wish, I wish he could be alive today to see what God Hath Wrought. 10,000 ukuleles ragin’ across the nation. He would have a posse around him, a cult. He in fact died at the same time I was starting my vaudeville theatre. The revival was just getting under way then.  I shall use the thought that his angel has been somewhere around all that time to keep me going. Indeed I like to hope he was smiling over my shoulder when I paid him tribute in my 2009 show Willy Nilly: 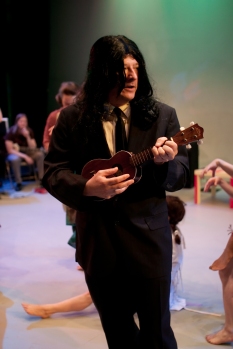 Still, his was a crucial time too. In an age of freaks, Tiny Tim was a freak’s freak. (Literally; early in his career he performed at Hubert’s Museum as “Larry, the Human Canary”). He came out of the Greenwich Village folk scene of the late 50s, early 60s, when people were exploring all sorts of exotic old sounds, not just folk, but also the blues, hot jazz, and even Tin Pan Alley. (Dylan had some reminiscences of Tiny Tim in his autobiography Chronicles, Volume One). He sang old hits of the ’20s and early ’30s made popular by Bing Crosby, Russ Columbo, Rudy Vallee and Cliff Edwards. He sang them in a high, womanly falsetto, emanating from the proverbial face only a mother could love — a huge goose beak, horse teeth, hair like seaweed, By the late sixties, when the country was in all-out nut mode, he made some extremely high profile appearances on Rowan and Martin’s Laugh-In, The Smothers Brothers and the Tonight Show. Most folks just kind of considered him a joke, and as time wore on, a dated joke. But he actually kept working straight up until he died, and was even having something of a resurgence, appearing on the Howard Stern Show (and his movie Private Parts), Roseanne, Late Night with Conan O’Brien, etc.  I wish he’d lived long enough to experience the respect that he deserved and undoubtedly would have been his if he’d been around today.

For much more on the legendary Tiny Tim, see my review of the documentary Tiny Tim: King for a Day.

To find out about  the history of vaudeville including important hippie neo-vaudevillians like Tiny Tim, consult No Applause, Just Throw Money: The Book That Made Vaudeville Famous