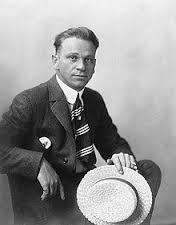 Today is the birthday of Wallace Beery (1885-1949). While best known to film buffs from roles in early talkies like The Champ (1931, for which he won an Oscar), and Dinner at Eight (1933), Wallace Beery had a substantial and lengthy career in silents prior to the coming of sound, commencing with a period in slapstick. His father was a Kansas City cop; Beery ran away at age 16 to be an assistant elephant trainer with Ringling Bros circus. After a couple of years of this, he joined his older brother Noah in New York City to try his hand at acting.

After a little under a decade of minor success on Broadway he moved to Chicago to be a low comedian at Essanay Studios in 1913. It was here that Beery played a drag character, a Swedish maid named Sweedie for a couple of years. As comedy, this was crude stuff. Beery with his huge, hairy arms, and simian face, indifferent dresses, wigs askew, made a humorously unconvincing female—about at the level of an amateur talent show put on by front-line soldiers. I’ve seen a handful of the extant examples. In Sweedie Learns to Swim, the titular lady tries to learn to swim in a bathtub, which naturally overflows and falls through the ceiling onto the fancy dinner party taking place on the floor below.

It was at Essanay, also that Beery hooked up with Gloria Swanson. The pair were briefly hitched and went to work for Mack Sennett at Keystone for a couple of years. Oddly, it was Swanson who found success there, and Beery, both a natural heavy and a guy with a track record in DRAG for Pete’s Sake, who floundered at the comedy studio. But that’s okay. He went on to be a major silent star, not just in comedies like Douglas Fairbanks’ The Mollycoddle (1920), Roscoe Arbuckle’s The Round-up (1920), and Buster Keaton’s The Three Ages (1923), but pictures of all genres, including The Four Horsemen of the Apocalypse with Valentino (1921), Fairbanks’ Robin Hood (1922), and The Lost World (1925, an important pre-cursor to King Kong). All prologue to his better known sound career nowadays, but I highly recommend these silent films.

A clip from Sweedie Learns to Swim is watchable on Youtube.