On The Subversive Squareness of Bob and Ray 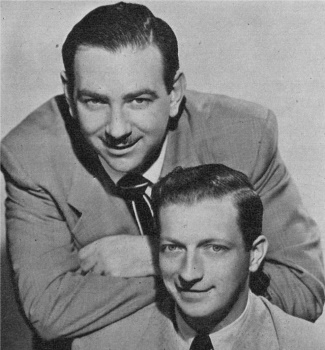 Today is the birthday of Ray Goulding (1922-1990), one of the finest comic minds this nation has yet produced. He and his partner Bob Elliott (1923-2016) would be on anyone’s short list of great radio comedians, all the more interesting and impressive given the fact their career flourished mostly after the great age of radio was over (the team worked almost constantly between 1946 and 1987).

My initial exposure to them came on one of their few television shows, a late night special called Bob & Ray, Jane, Laraine and Gilda that premiered in Saturday Night Live’s normal time slot in 1979, teaming the pair with the three female members of the Not Ready for Prime Time Players. I was especially impressed with the pair of these elderly gentlemen, sitting in swivel chairs, singing Rod Stewart’s “Do You Think I’m Sexy?”

I’d also encountered them in Kurt Vonnegut’s 1972 PBS  show Between Time and Timbuktu. Vonnegut was a huge fan of theirs.

But it wasn’t until I received a box set of their radio shows as a Christmas gift shortly after Ray’s death in the early 90s, that my appreciation went through the roof. To this day they remain a huge influence, and it’s all I can do not to talk like them sometimes. A mixed blessing, because not everyone appreciates their brand of dry, understated humor, to put it mildly. They are truly anomalous performers in the show business, like an X-ray that shows how empty, moronic and boring — but funny, if unintentionally — is the majority of the crap we actually spend time watching or listening to hour after hour every day in the self-delusion that we are entertaining ourselves.

The pair met while doing their own separate shows on a local radio station in Boston. They were first teamed in 1946 and the magic was so popular that they remained in demand for over four decades. At various times they had shows on all the national radio networks in America, including, in their final years, NPR, and also had local shows in the biggest American regional market, New York City.

From 1951 to 1953 they had their own sketch comedy show on NBC television called Bob and Ray. Other cast regulars included Audrey Meadows and Cloris Leachman.

Ironically, they may have achieved their greatest fame and widest exposure anonymously, as the voices of the animated characters Bert and Harry Piel in a series of Piels Beer commercials in the late 1950s.

The pair also did live performances, as in their Broadway show The Two and Only (1970) and their appearance at Carnegie Hall A Night of Two Stars (1984). 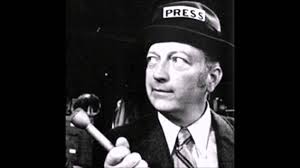 But the meat and potatoes of their careers for 40 years was radio.

Bob (who was Chris Elliot’s father, and was a regular on his sit-com Get a Life) was usually the feeder. In a goodly percentage of their routines he plays a reporter named Wally Ballou, and he very smoothly lobs questions to Ray, who is a GENIUS improviser who riffs and riffs and riffs just as easy as breathing. There’s something very British about their comedy — it’s very straight-faced, very dry. The Brits have a lot of comedians like that, we have very few. Plenty of (not very bright) people could listen to them, I have no doubt, without ever perceiving that they are doing comedy.

This interview with David Letterman (who also idolizes and emulates  them) is very illuminating. Notice the difference between part one and part two. In ordinary conversation with Dave, Bob is the funny one. Ray is uncomfortable in his own skin, all-at-ease. But when they go into the comedy bits in the second half, Ray soars. In this, he seems much like Peter Sellers. He can only do characters. He doesn’t do a “self.” But enough psychoanalyzing. I could spill enough ink for a book, or an entire blog about this team.

To find out more about show business past and present, consult No Applause, Just Throw Money: The Book That Made Vaudeville Famous, available at Amazon, Barnes and Noble, and wherever nutty books are sold. And don’t miss my new book Chain of Fools: Silent Comedy and Its Legacies from Nickelodeons to Youtube, just released by Bear Manor Media, also available from amazon.com etc etc etc