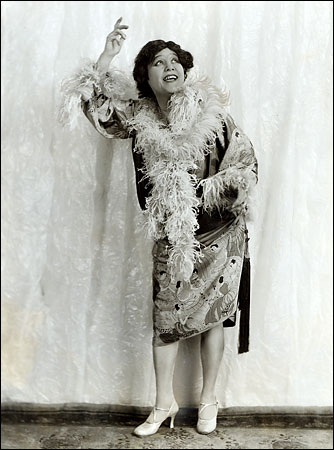 Stella Mayhew (1874-1932) was a headlining vaudeville and musical comedy performer whose career spanned 50 years. She began acting as a child in melodramas in her native Ohio. At 16 she broke into vaudeville as a singer, moving to New York in her early 20s. Just before the turn of the century she began to be in demand at the big time houses, singing “coon songs”, usually in blackface** (As with a lot of stout women, managers preferred to hire her in minstrel guise). From 1902 through 1922 she performed in a team with a singer-dancer named Billee Taylor; Taylor and Mayhew often topped the bills they appeared on. At the same time, Stella also appeared solo in shows for Lew Fields and the Shuberts. When she broke up with Taylor both romantically and professionally in 1922, she remained a headliner through 1930. In 1927 she starred in the hit Broadway show Hit the Deck for the first and only time (she had often been in hit Broadway shows, this was the first time she was the star of one). She died from blood poisoning from an infected cut at the age of 68.

To find out more about the variety arts past and present, consult No Applause, Just Throw Money: The Book That Made Vaudeville Famous, available at Amazon, Barnes and Noble, and wherever nutty books are sold. And don’t miss my new book Chain of Fools: Silent Comedy and Its Legacies from Nickelodeons to Youtube, just released by Bear Manor Media, also available from amazon.com etc etc etc.