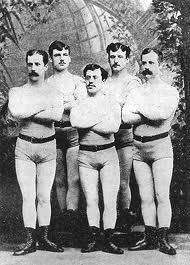 Among the most influential figures in circus and variety history were the Hanlon Brothers, an English troupe whose nucleus originally consisted of six acrobatic siblings. Three of them had started as tumblers in their childhood, apprenticed to one “Professor” John Lees. As such they made their performing debut in 1847. (For this reason, the troupe is sometimes referred to as the Hanlon-Lees). In time, the act would include three more brothers plus various others, and would add the then-new spectacle of aerial acrobatics (i.e., trapeze), which they called by the catchy name “zampillaërostation”.

In 1878, at the urging of one of their members, a French juggler named Henri Agoust, the brothers began to present original pantomimes that enlarged upon the tradition of startling stage effects (trap doors and the like) by incorporating the Hanlons’ acrobatic abilities. Their original spectacles were a sui generis; they rapidly deviated from the usual commedia cast of characters, but continued to be referred to as pantomimes for lack of a better term. Various incarnations of the troupe performed these full length stage shows in England, France and America through 1911, after which they played stripped-down excerpts in American vaudeville, and some iteration of the troupe was playing in Ringling Brothers, Barnum and Bailey Circus as late as 1945. The Hanlons were extremely influential; numerous other comedy-acrobatic acts adapted their surprising techniques. Echoes of their work would make it to the silver screen most markedly in the work of Buster Keaton, many of whose gags, such as the balancing ladder stunt in Cops (1922) and the leap through a window with a quick-change of costume in mid-air from Sherlock, Jr. (1924) were lifted whole-cloth from the Hanlons.

For more information on the history of silent and slapstick comedy past present and future, see Chain of Fools:  Silent Comedy and Its Legacies from Nickelodeons to Youtube available at Bear Manor Media, and also through Amazon.com and wherever nutty books are sold.

And to find out more about the variety arts past and present, consult No Applause, Just Throw Money: The Book That Made Vaudeville Famous, available at Amazon, Barnes and Noble, and wherever nutty books are sold.