Eddie Masher: The Other Skeleton Dude 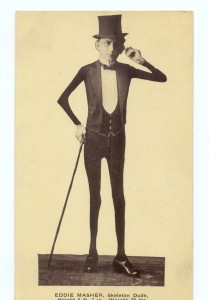 Brooklyn native Eddie Masher (nee Hagner, 1892-1962), billed himself in side shows as the “Skeleton Dude”. However, one notes with interest that he begins to appear on the scene immediately after the original Skeleton Dude, John Coffey passed away in 1912. In 1913, there was a fracas in the papers about a lawsuit; Masher was suing a tailor who claimed he couldn’t make a suit thin enough for him (almost certainly a publicity stunt).

Perhaps such lengths were not necessary. I’ve heard accounts of the 5’7″ Masher’s weight at anywhere between 76 and 38 lbs. The Guinness Book of World Records seems to have split the difference, claiming that he weighed 48 lbs. I’ve read books that weigh more than that!

“Masher” means a guy who hits on the ladies — Hagner had essentially taken over the man-about-town character devised originally by Coffey. It appeared to work well for him. Both the Barnum & Bailey circus, and Coney Island’s Dreamland Circus Sideshow made use of his talents during his 24 year career.