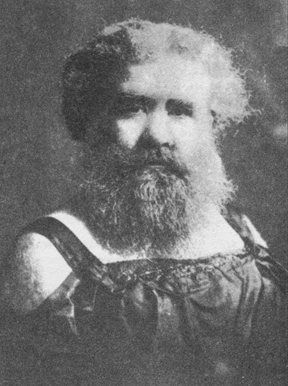 Today is the birthday of Grace Gilbert (1876-1924). One of the most masculine of all the circus bearded ladies, she would often earn extra dough doing roustabout work alongside the razorbacks. It is also written (and it could be true, though it also sounds like good carny p.r. copy) that when she got married in 1910, the minister got confused about which one was the groom.

Originally from Ohio, she was already a professional bearded lady by age 18. By 1901, her beard was 18 inches long, head and shoulders above her nearest rival. At that time she was working for Ringling Brothers, although she was soon hired away by the Barnum and Bailey organization which at that time had not yet merged with Ringling (in fact they were competitors). She also worked for the McCaddon circus and Hagenbeck-Wallace.

For a time she dyed her beard yellow and billed herself as “The Girl with the Golden Whiskers”, but got tired of all the bleaching. Soon after marriage she retired and tried to settle down to a normal, married life, but that can be difficult sometimes when you’re a woman with a full beard. Starting in 1916, she was a regular at Coney Island, where she worked the remainder of her life.