Alan Alda: A Baby of Burlesque 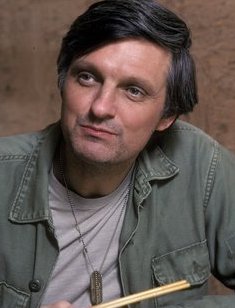 Today is the birthday of the incomparable Alan Alda (Alphonso Joseph D’Abruzzo, b. 1936). As a teenager I idolized him — obviously for his role as Hawkeye on M*A*S*H, although I only liked the reruns, from the show’s origins in 1972 until roughly around 1976. After that, the show became unbearably politically correct, preachy and not very funny. But prior to that…I absolutely lived for my daily after school dose of M*A*S*H reruns (which I watched in the late 70s, early 80s when the first-run episodes had long since Jumped the Shark).

Alda’s version of Hawkeye (as opposed to Donald Sutherland’s earlier movie version, which has its own merits, to be sure)  was the perfect blend of two completely divergent cultural types…the countercultural Jeremiah, kneejerk rebel and sensation-loving free spirit…MIXED with a suave, highly verbal light comedian. At this unique skill Alda was unparalleled. As far as I know, he is the only major actor to do all three of the top Sid Caesar writers: Larry Gelbart, Woody Allen and Neil Simon. He delivers their quips and one liners like music, he understands their rhythms perfectly. I consider him one of the very few comic actors whom it makes sense to talk about in the same sentence as Groucho Marx. He understands how to deliver a funny line in exactly the same way. (Or, understood, he’s been taking heavier roles of late).

Now, I tried to interview him for No Applause — reached out to his office and didn’t get a reply. THEN, not long after that, he came into a bookstore and there he was standing ten feet from me. Did I ambush him? No, baby, that’s not how the Travelator rolls. But, I’ll tell you why I was so het up to interview him for a book about vaudeville. His father, Robert Alda, was in vaudeville and  burlesque. In point of fact, he was the only Tit Singer (that I know of) ever to make a name for himself in the larger show biz world outside of burlesque (the elder Alda was a familiar face in B movies and on Broadway and on television in 40s, 50s and 60s.)

Uh, did I just say what you think I said? Yes, “Tit Singer”. I have a hard time typing it; Alda has a hard time saying it. If you haven’t already, you owe it to yourself to see Leslie Zemeckis’s excellent film Behind the Burley Q, in which she somehow persuaded Alan Alda to talk about his past growing up around burlesque theatres. Now: he was one of the most strident and vocal male feminists of the 1970s: I imagine he is bewildered, perhaps even alarmed at the current burlesque revival. But he participated in this documentary, perhaps to let us know how sordid and tawdry the old school scene was back in the day; he was exposed to a lot of stuff a kid probably shouldn’t see. But he has exhibited nostalgia for it on occasion After all — Joey Bishop is in his film Betsy’s Wedding (1990). Thank that’s an accident?

Alsa also talks about that background in this terrific 2016 interview on Mark Maron’s WTF. He gabs about apearing in burlesque sketches as toddler and about appearing with Phil Silvers both in burlesque and on Sgt. Bilko!  He also talks about working in summer stock with the likes of Buster Keaton, Mae West, and Victor Jory! For real. And standing backstage and absorbing the rhythms of Noel Coward, and studying improv with Viola Spolin and Paul Sills. And he has high praise for the acting of Jackie Gleason (Milton Berle, not so much), and the skill of Charlie Chaplin. And — get this — he doesn’t like Marx Brothers movies! “Too silly” he says!  Hear the full interview here.