On Andy Kaufman and the Big Con 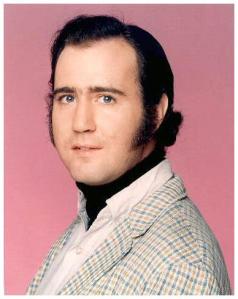 Today is the birthday of that great genius of comedy, performance art, theatre and the Great American Hoax, Andy Kaufman (1949-1984).

About ten years ago, a prominent journalist was interviewing me and, in the context of vaudeville and burlesque, asked me whether Andy Kaufman (whom the journalist had just done an article about) was an influence on me. I realized that he definitely was, a major one, but it hadn’t really dawned on me how, or to what extent.

Television variety, like the vaudeville that came before it, was an “everything machine”. Thus, though Kaufman went against the grain of most entertainers, there was still a place for him in the business. Variety maintains a special category for “nuts”, even ones who maintain an ironic stance, whose whole gig is subverting the very machine they are taking part in. Back in the day, Fred Allen, Frank Fay and the Marx Brothers were among those who deconstructed the apparatus around them, who forced you to play by their rules.

Kaufman was the ultimate manifestation of that during the television era, and he came along when the institution sorely needed it. The Last Days of Broadcast Television Hegemony (before cable with its much broader spectrum of channels became fairly universal) were bleak in ways you young ‘uns will never understand. Three and a half networks was just fine in the 1950s and 60s when the writers were guys like Paddy Chayefsky and Rod Serling, and the stars were old stage veterans. But by the late 1970s, it had reached its lowest point, not just stagnant but routinely mortifying, fully living up to its nickname “the idiot box”. Have you noticed it hasn’t been called that in a while? Not because there isn’t still stupid stuff on there, because there is – -more than ever. But now there is so much choice available, that there’s just as much of quality to be found. This very much was NOT the case in the late 70s.

Thus there grew up a movement that parodied and poked a hole into the awfulness of it all, certain shows and performers who were subversive right in plain sight. Among these I would include Kaufman, Steve Martin, Saturday Night Live, The Gong Show, David Letterman and Mary Hartman, Mary Hartman. These were like a breath of fresh air in the middle of a landfill. Like a lot of people, I would have become aware of Kaufman — at first – – from mainstream sources. His role as Latka Gravis on Taxi (1978-1983) spawned a national catchphrase: “Tenk you veddy much!”, and he got most of his early air time right in the belly of the beast in the mid 70s on The Merv Griffin Show, Dinah, The Mike Douglas Show,  The New Dick Van Dyke Show and The Tonight Show. In retrospect, my memories of his interactions with these straight, clueless hosts are pretty hilarious..way more entertaining than the theoretical “entertainment” the programs were ostensibly providing.

I wasn’t tuning in to SNL until its second or third season so I missed his seminal early appearances on those shows until I later saw them in reruns. But in retrospect, it seems like I was there for just about all the rest of it — I witnessed some amazing, historic television. I saw Uncle Andy’s Funhouse his 1979 TV special, with his guest star Howdy Doody. I saw him on David Letterman’s short-lived day time program. I saw his live, staged altercation on Fridays with Michael Richards and Jack Burns. I saw the SNL episode where they took an audience poll and voted him off the show. I saw all the wrestling stunts, including the fight with Jerry Lawlor on Letterman.

And I want to tell you, people were taken in. I know this because I had arguments with people!  It was so plainly obvious to me that these were all hoaxes – – he was a comedian famous for getting into, and staying in character, and this was show biz. And these tv shows would often do sketches where people broke character, broke the fourth wall, and otherwise broke the rules. It was plainly just an extension of that, taken just a bit farther. But people would be like, “No, that was real”, and “Kaufman’s just a jerk.” I mean, just how stupid can you be? The sad thing, the majority of the public seems to have been that stupid – – towards the end, they were turning against him.

And then suddenly he was dead of cancer, although I continue to nourish the hope that that, too is a stunt, the most stupendous, epic practical joke of all time.

If you are younger and you only know Kaufman’s work via his reputation and from the film Man on the Moon (1999), I have two cents. Jim Carrey’s performance is accurate in many respects, but I think he made a glaring mistake in privileging Kaufman’s famous spaciness over a much more important quality that I take to be the elephant in the room. That is Kaufman’s anger and hostility. I know it’s there because I detect it behind his performances, but even if you can’t see it there, just apply logic. The man is fucking with people. He is fucking with producers, hosts, co-stars, sponsors, and the audience! He wants to provoke something and it’s something more than laughter. You people are dead out there and you need a slap in the face. Not one – – a whole bunch. God, I love Andy Kaufman.

And now one of his most cherished routines, Foreign Man transforming into Elvis Presley, from Uncle Andy’s Funhouse:

To find out more about these variety artists (including tv variety) and the history of vaudeville, consult No Applause, Just Throw Money: The Book That Made Vaudeville Famous, available at Amazon, Barnes and Noble, and wherever nutty books are sold.