Lidsville: The Show On Which Charles Went Full Nelson Reilly

A ubiquitous presence on game shows and talk shows in the 1970s and beyond, Reilly first broke into the public’s consciousness in the 1960s with attention-getting roles on Broadway, and guest spots on television sit-coms. But it was with the role of HooDoo in the psychedelic Sid and Marty Krofft kid’s show Lidsville (1971) that he truly first became in the modern sense, himself. It was for HooDoo, you see, that the man first went “Full Nelson Reilly”, so to speak, freed by the bizarre get up to pull out all the stops, the strange vocal mannerisms, especially that odd, odd laugh that I have YET to hear anyone accurately impersonate, a sort of bray mixed with a guffaw, followed by a snort. 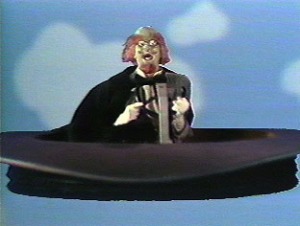 Nowadays, Lidsville kind of falls through the cracks. People tend to remember H.R. Pufnstuf (which came the year before) and Sigmund and the Sea Monsters (which came later). But as the title sequence belows reveals, Lidsville was the Krofft brothers in their trippy glory, with the now teenaged (and very stoned looking) Butch Patrick (formerly of The Munsters), falling down a magician’s giant hat Alice in Wonderland–style and landing in a land of hats, dominated by Reilly in a male incarnation of the popular Pufnstuf villain Witchy-poo.

Lidsville was not Reilly’s last outing in the children’s television game. A couple of years later, he was the title character on the less-well rememebered Uncle Croc’s Block (1975-76).

To find out more about show business past and present, consult No Applause, Just Throw Money: The Book That Made Vaudeville Famous